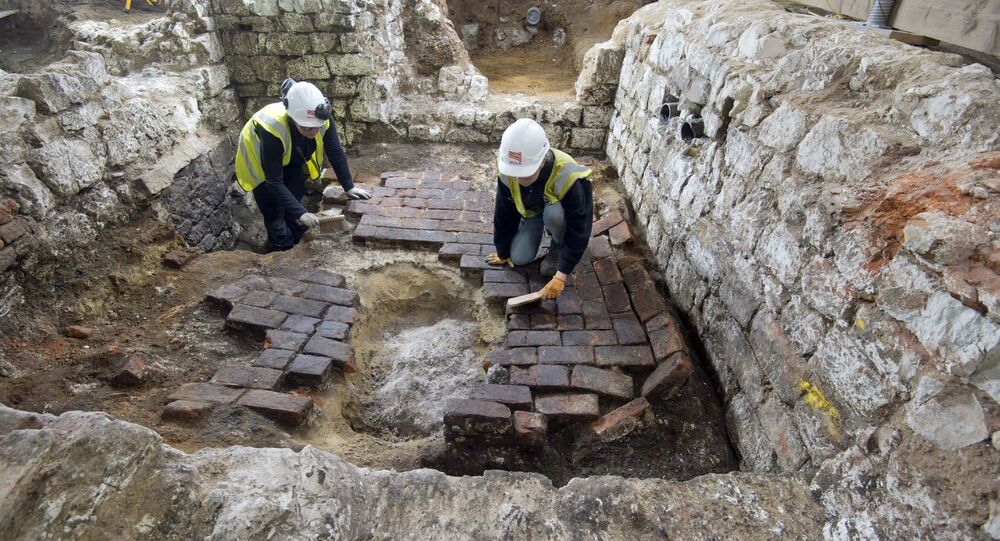 At the end of 2019, British archaeologists discovered a 14th century cesspool that served numerous different purposes over the course of its long existence. However, some odd findings inside the pit have raised questions among researchers.

A team from the Museum of London Archaeology (MOLA) has found a medieval tile depicting a strange, even “mythical” creature “with a human head at one end and a leaf-like tail at the other”, senior archaeologist Antonietta Lerz told Live Science.

The tile, which reportedly dates back to 1350-1390, was part of a four-tile panel that could have been made in the village of Penn in the Buckinghamshire district.

“Penn' tiles were often used in palaces and monastic sites during the medieval period”, the researcher revealed.

​The mysterious artefact, as well as other findings, such as a post-medieval period  two-pronged fork, a gold-plated ring with a garner-like stone, and a glazed bowl, were all discovered in an ancient cesspit in London that dates back to the 14th century.

It remains a mystery how these objects wound up in such an unusual place.

The archaeologists first came across the cesspool at the end of 2019 when they were excavating the basement at the Courtauld Institute of Art. According to the team, the 4.5-square-metre pit was used for human excrement for around one hundred years and initially had seats around it, but “the period of use many have been longer”, as it had been cleaned out from time to time.

© Photo : LIAT NADAV-ZIV/ISRAEL ANTIQUITIES AUTHORITY
'Arabian Nights Treasure': Cache of Ancient Gold Coins Found by Archaeologists in Israel
“We hope to be able to refine our interpretation once all of the material is properly assessed”, Lerz said in an email.

However, by the 17th century the cesspool had changed into a fashionable cellar, as several layers of flooring were added to the pit. In the 19th century, the place saw another addition – a small latrine in its northwest corner.