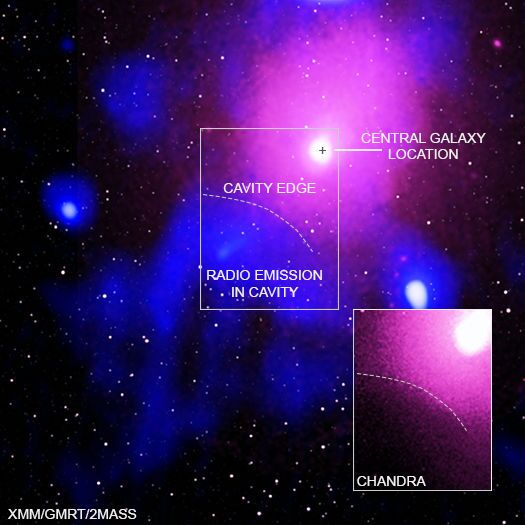 Largest Explosion in the Universe Spotted by Astronomers

The gargantuan blast is recorded as occurring in a distant galaxy cluster hundreds of millions of light years away from planet Earth, and five times bigger than the previous record holder, according to a study report.

Astronomers have spotted a supermassive cosmic explosion that is believed to be the largest-ever explosion identified by humans. The giant blast took place in the Ophiuchus cluster, some 390 million light-years away from Earth, according to the study.

Researchers posit that the source of the unrivaled explosion was an enormous black hole in the middle of one of the galaxies in the Ophiuchus cluster. Galaxy clusters are considered the largest structures in the known universe. Held together by gravity, they contain thousands of individual galaxies, dark matter, and hot gas.

"In some ways, this blast is similar to how the eruption of Mt. St. Helens in 1980 ripped off the top of the mountain," said Simona Giacintucci, lead author of the study at the Naval Research Laboratory in Washington DC. "A key difference is that you could fit fifteen Milky Way galaxies in a row into the crater this eruption punched into the cluster's hot gas."

In 2016, NASA's Chandra X-ray Observatory revealed hints of an incredibly powerful explosion in Ophiuchus. Giacintucci and her colleagues observed the remnants of rare phenomenon using X-ray data from Chandra and ESA's XMM-Newton, as well as radio data from the Murchison Widefield Array (MWA) in Australia and the Giant Metrewave Radio Telescope (GMRT) in India.

The study, published on Thursday in The Astrophysical Journal, confirmed that the enormous explosion occured.

"The radio data fit inside the X-rays like a hand in a glove," study co-author Maxim Markevitch, of NASA's Goddard Space Flight Center in Greenbelt, Maryland, said in the statement. "This is the clincher that tells us an eruption of unprecedented size occurred here."

The research team said that the energy released by the Ophiuchus blast was hundreds of thousands of times greater than explosions typically seen in galaxy clusters and about five times greater than the previous record holder MS 0735.6+7421.