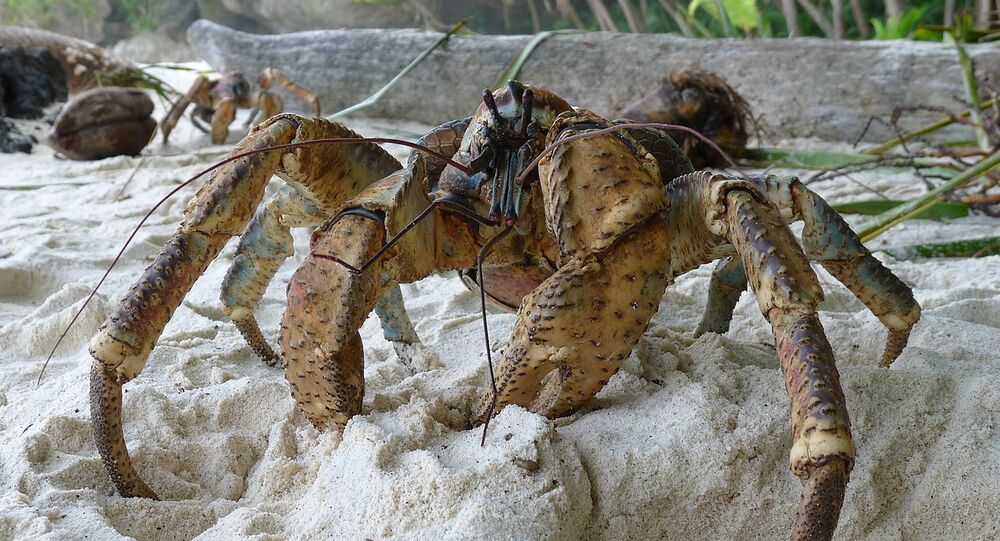 The birgus latro or coconut crab is the largest land-living invertebrate in the world. They can grow up to 1 metre in length and weigh up to 4 kilograms. They primarily feed on fruit on nuts, but also consume small animals like tortoise hatchlings and are not squeamish about eating birds or even their own kind.

Coconut crabs talk during mating claims a team of Japanese scientists. According to their study published in the journal Zoology, these gigantic creatures use a set of clicking sounds for individual communication in different situations, including for intimacy. Researchers traced the sound production system using x-ray videography and anatomical observation. The coconut crabs made sounds by beating an appendage called the scaphognathite, which is also used for ventilation.
Scientists say that the frequency of the sounds produced by both female and male crabs was diverse and that the sounds varied in terms of interval. According to them, coconut crabs are the only known crustaceans that display such behaviour. Researchers said the communication occurred before, during, and after mating. They stressed that their study didn’t establish the relationship between the sounds and actions.

Coconut crabs gained public attention after a photo of a crustacean hanging on a trash can appeared online.

​Although these creatures look menacing they primarily feed on fruit, nuts, seeds, the pith of fallen trees, and sometimes on their own kind. They can eat small animals like tortoise hatchlings and there are even instances of them eating birds. They earned their name by climbing coconut palms to avoid predators like sea birds, bigger older crabs, and humans.