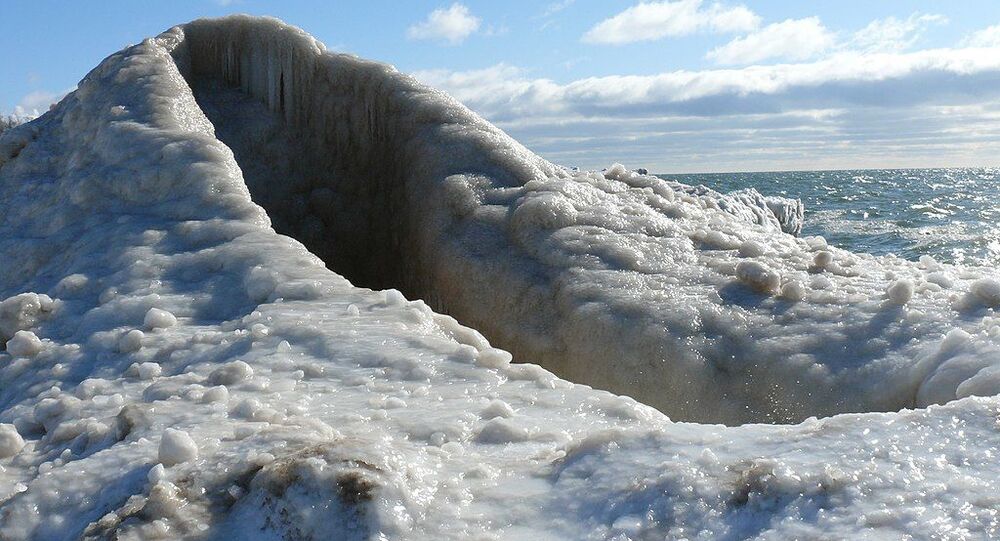 Ice volcanoes formed along the shores of Lake Erie, one of the Great Lakes in North America, a few years ago, but the phenomenon remains a rare one.

Rare ice volcanoes spewing plumes of water on the shores of Lake Michigan, the second-largest in volume of the five Great Lakes of North America on 15-16 February were caught on film by the National Weather Service (NWS) in a bizarre and spectacular sight.

A staff member of the NWS Grand Rapids had been strolling on the lake's eastern shore, Oval Beach, and took several photos of water gushing from icy cone-shaped mounds in the ground. "You never know what you'll find at the lake until you go out there… Today it was volcanoes," tweeted the employee.

You never know what you'll find at the lake until you go out there. Today it was volcanoes. Here's a close up: pic.twitter.com/FLZqDZ1d8U

​“Ice volcanoes” are in actual fact not volcanoes at all. The phenomenon earned the colorful nickname due to the way the water seems to spew from the mounds volcano-style. The cone-like shapes are formed at the edges of lakes where thin sheets of ice form.

Tom Niziol, a contributor for Weather Underground's Category 6 blog, explained in a Facebook post that when water beneath the ice sheet builds up enough pressure, it forces jets of liquid to the surface. If the conditions are right and the air above is cold enough, the water freezes, forming what resembles a mini volcano.

"[Ice volcanoes] can be very dangerous to climb on however because they are hollow and built over that hole in the ice… Don't ever go venturing out onto them,” warned Niziol.

Niziol reminded that the rare phenomenon had been seen a few years earlier along the shores of another of the Great Lakes -Lake Erie.

Those are some of the best ice volcano photos I have seen, I have seen them on the east end of Lake Erie as well!!

​“Ice volcanoes” are more likely to form near large bodies of water – like the Great Lakes - where below-freezing temperatures result in an ice shelf forming along the coastline, said Matt Benz, a meteorologist for AccuWeather.

Since the pressure beneath the shelf has to be really powerful to push up spurts of water through cracks in the ice, the phenomenon tends to manifest itself along shorelines where winds are strong enough to maintain persistent waves.

​"It’s almost a “Goldilocks” situation where you need just the right conditions over a period of time to get these [formations] to develop," said Matt Benz.

On 16 February, when the Oval Beach volcanoes were captured on camera, the winds were "ideal for pushing waves right into the shoreline at this location," added Benz.