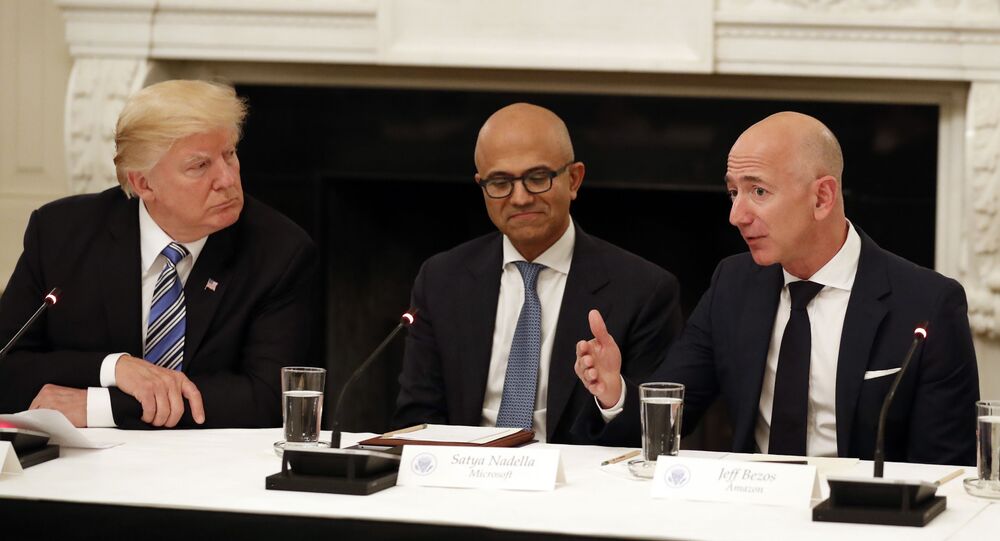 Multinational tech giant Amazon filed a lawsuit in November protesting the Pentagon’s decision to give a large-scale contract to Microsoft, fuming it had fallen victim to “unmistakable bias”.

Redmond-based computing titan Microsoft has blasted digital rival Amazon for employing “sensationalist and politicised rhetoric” in a lawsuit over a lucrative military contract known as JEDI (the Joint Enterprise Defence Infrastructure), according to released court records, The Washington Post reported.

Amazon claims the results of the competition between the two were skewed by “repeated public and behind-the-scenes attacks” from Trump and is seeking depositions from Esper and the president, citing Microsoft’s purportedly inferior cloud tech. Bill Gates’ brainchild has meanwhile confronted the claims arguing these are merely ungrounded allegations, while the DoD is yet to issue a brief on the matter.

“Without a compelling case on the merits of a traditional bid protest, [Amazon Web Services] tries to make this case all about President Trump", Microsoft’s attorneys wrote in a filing unsealed Monday, WaPo reported.

Amazon struck back claiming that they have objective reasons to protest:

“AWS [Amazon Web Services] believes that all of its protest grounds are valid, and that it’s important that the numerous evaluation errors and blatant political interference that impacted the JEDI award decision be reviewed", Amazon spokesman Drew Herdener pointed out.

In July, Trump said he had received “tremendous complaints” from companies that compete with Amazon, specifically naming Oracle, IBM, and Microsoft. Around that time, an Oracle lobbying document labelled “A Conspiracy To Create A Ten Year DoD Cloud Monopoly” allegedly reached the president’s desk, as reported by Bezos-owned The Washington Post as well as CNN.

Esper subsequently reviewed the JEDI contract while meeting with at least one unnamed person, who was closely involved in the bid evaluations, court records suggested.

However, he then forwarded decision-making on the issue to his deputy, with his office stating he preferred not to raise concerns over his impartiality as his son worked for one of the procurement bidders.

Amazon’s protest rests on the president’s own public statements. The company cited a February 2016 campaign rally in Texas, in which Trump warned Amazon would “have problems” should he be elected. The company also quoted from Fox News, which wrote Trump lamented that he had heard a great number of “complaints” from Amazon’s rivals in the market.

No less relevant is a book by Navy Cmdr. Guy Snodgrass, a former speechwriter for onetime defence chief Jim Mattis, in which he stated that Trump had sought to “screw” Amazon out of the contract and that Mattis, Esper’s predecessor, had allegedly protested.

Microsoft dismissed the claims, stating the president’s comments are irrelevant, as none of them mentions the JEDI project.

Microsoft went on to charge that Amazon should have voiced its concerns over the Pentagon’s work on the contract and selection of a winning bid at the time they occurred, rather than after the much-heralded contract was awarded.

The reported $10 billion JEDI contract with the Pentagon envisages provision of necessary cloud software to the agency.

In January, Microsoft CEO Satya Nadella attributed his company's win to its so-called "hybrid cloud", which is all about mixing pure cloud computing with on-site computing.

Amazon filed its first legal complaint disputing the decision in November, claiming it had been the victim of "clear deficiencies, errors, and unmistakable bias", despite Dana Deasy, CIO at the Department of Defence, telling the Senate Armed Services Committee in October last year that the White House could not have interfered in the process:

"We have kept the identities of every member of the source selection team anonymous throughout this process. In my discussions with the Deputy Secretary of Defence and the Secretary of Defence, at no time throughout this process have I ever shared any proprietary source information with them, nor have I ever divulged, when we got to the conclusion, who the awardee was", he explained.