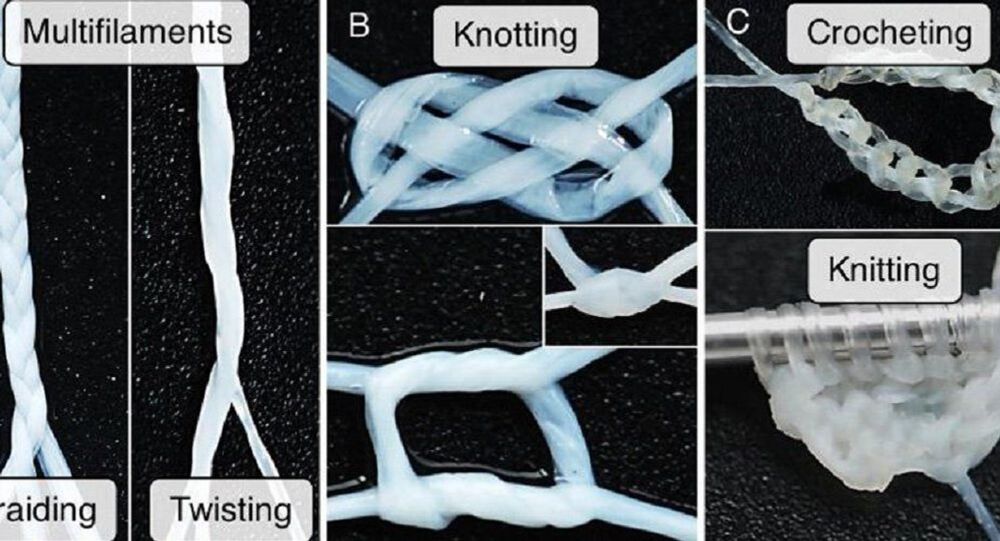 Got a Wound? You Can Stitch it Up With Your Own Flesh, Scientists Say

A team of French researchers has grown textile from human flesh that can help heal wounds and repair organs.

According to their findings, published in the journal Acta Biomaterialia, the scientists cut sheets of human skin cells into yarn-like strips. Those strips, dubbed “human textile”, allow for a variety of shapes and surgical techniques such as knitting, braiding, weaving, and crocheting.

Most modern suture materials are synthetic and either decompose in the human body or should be removed by surgeons after the wound heals because the body would not dissolve them. Absorbable sutures compose of chemical polymers, such as polyglycolic acid, and the most popular non-absorbable materials are nylon or polyester.

“Most permanent synthetic biomaterials are recognised as foreign by the innate immune system, which leads to the well-described ‘foreign body reaction’ upon implantation,” the researchers wrote.

Both types of suture that is currently employed can cause adverse tissue reaction and complicate the healing process, although the non-absorbables are generally considered to be safer. Human textile can decrease the risk of immune response and can be used to suture a wound or fabricate “fully biological, human” tissue, according to the paper.

So far, the yarn has been used to stitch wounds on a rat, which fully healed in just two weeks, and seal a sheep’s leaky artery.

There have been some other advances in wound-healing recently: just this week, a team from the University of Toronto unveiled a handheld 3D ‘skin printer’. They say it can patch large burns with sheets of skin, with bio ink made from stem cells speeding up regeneration and reducing scarring.

And last year, Chinese researchers created a potentially life-saving ‘bio-glue’ – an adhesive gel that could glue a wound together within seconds when activated by UV light. The technology has not been tested on humans yet.