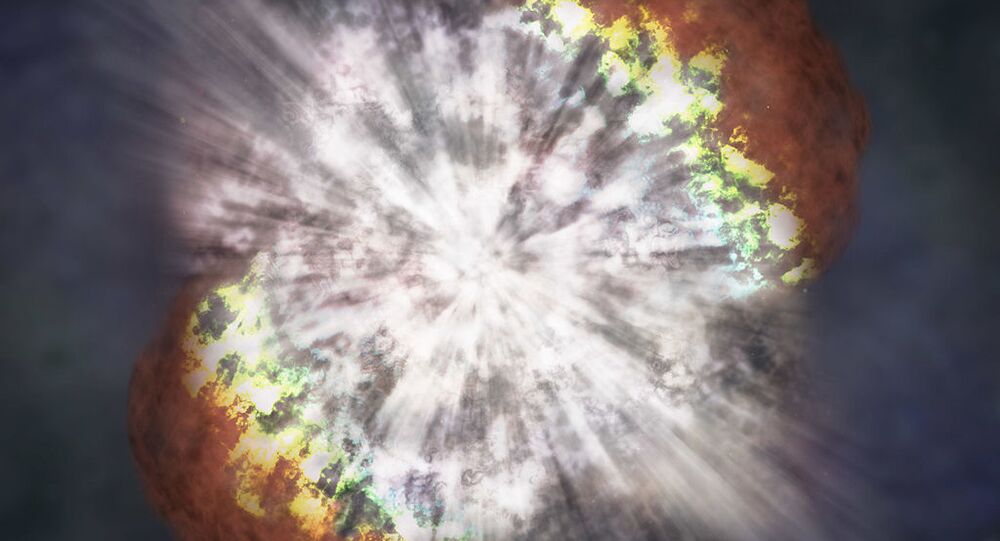 Hypernovae, aka supermassive stellar explosions, are largely understudied, but as follows from some specific estimates, there could be unexpected interstellar interactions behind these jaw-dropping astronomic fireworks shows.

It wasn’t until now that researchers may have found a clue to the super-powerful stellar blast that made international headlines 14 years ago, as they scrutinised the "lines" that continued to be emitted non-stop about a year after the cosmic blaze, known under the code name SN 2006gy, reached its peak. The results of the research have been published in the journal Science.

The team discovered large amounts of iron in the emissions, which, they said, may have solely occurred due to the supernova’s interactions with some stellar material that had been ejected hundreds of years earlier. Judging by the quality and quantity of the ejected lines, the SN 2006gy  could have started not just with one star, but at least with two, astronomers came to believe.

"A candidate scenario to explain this is [the] evolution of a binary progenitor system, in which a white dwarf spirals into a giant or supergiant companion star", the study reads, outlining a potential binary star collision before a supernova blast.

What proved to be a rare collision between binary stars – two stars that orbit around one another, occurred between 10 and 200 years before the supernova was detected. The two stars could have enveloped the space around the system as they merged over the next decades. When the merger finally resulted in a supernova explosion, the gassy layers could have visibly boosted its effects, which the astronomers witnessed at the time of the SN 2006gy event, and also produced the surprising iron emissions, the paper concludes.

“The shell must have been ejected by the progenitor star less than a century before the explosion, perhaps owing to interaction with a binary partner", the study points out.

The explanation, however, is a bit far-fetched and purely mathematical, since scientists have to date never witnessed two binary stars merging with their own eyes, like in September 2006, when a one-of-a-kind star, exceeding Earth’s sun in brightness by 50 billion times, exploded to life 240 million light years away in the Perseus constellation.

For 70 days, the blast further increased in brightness outshining its home solar system and surpassing any ordinary supernova in its power. Currently, the stellar system also found in the Milky Way, Eta Carinae, about 7,500 light-years away from Earth, shows the same signs of going up in brightness, with astronomers expecting the stars to finally blow in their own supernova “bang”, or a hypernova, in the next 1,000 years, making it a fantastic visual effects’ show.