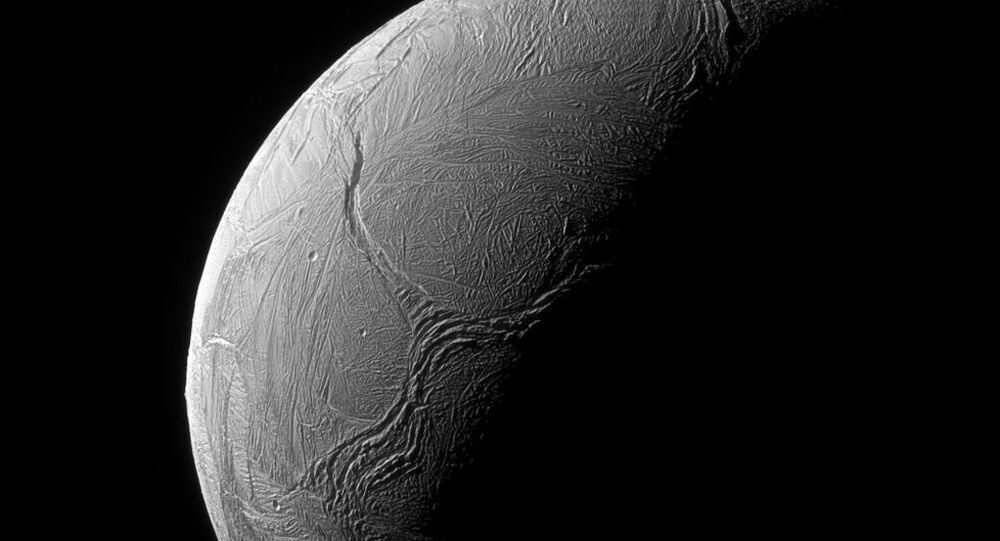 Scientists long have assumed that Enceladus together with Jupiter’s moon Europa are the best places to look for life as the two celestial objects have vast amounts of water hidden under a thick crust of ice. Now researchers have discovered another detail that may confirm their hypothesis.

Saturn’s moon Enceladus may have enough energy resources to support life, say scientists from the Southwest Research Institute. Analysing data from the Cassinini probe, which examines Saturn and its system – the planet’s ring and satellites – they found that a whole world may be hidden under Enceladus’s crust of ice.

Cassini sampled water plumes that erupt through the surface of Enceladus and found that they contain molecules with carbon, an essential part of life.

"While we have not found evidence of the presence of microbial life in the ocean of Enceladus, the growing evidence for chemical disequilibrium offers a tantalizing hint that habitable conditions could exist beneath the moon's icy crust", said Dr Hunter Waite, the principal investigator behind NASA's Cassini spectrometer analysis of the moon.

The water plumes that mysteriously erupt through Enceladus’ surface have also been observed on Jupiter’s moon Europa. Both Enceladus and Europa are the main targets in researchers’ hunt for extraterrestrial life.

Earlier this month NASA completed tests of the Buoyant Rover for Under-Ice Exploration or BRUIE in Antarctica. The rover, which looks like a hand weight with two wheels on each side, will have to dig through several kilometres of ice on Europa or Enceladus and then examine areas, where water meets with ice, as scientists say that there is potential for finding signs of life there. NASA has not given a timeline for BRUIE’s launch.