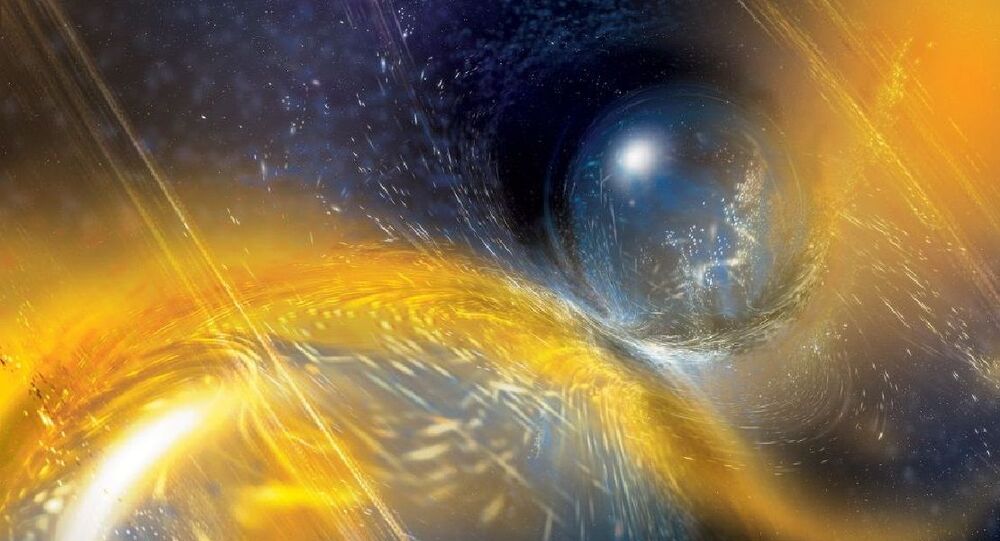 Last month, another group of astronomers warned that the immensely powerful bursts of gamma-ray radiation produced during the collision of two neutron stars can be strong enough to fry the DNA of any living organism unfortunate enough to be nearby.

For only the second time ever, the Laser Interferometer Gravitational-Wave Observatory (LIGO), the mostly-US-based network of sensors built to detect cosmic gravitational waves, has observed what appears to be the collision of two ultra-dense neutron stars.

The observation was made on April 25, 2019 by a LIGO detector in Livingston, Louisiana, with the pair of neutron stars estimated to have had a total mass approximately 3.4 times that of our Sun. Katerina Chatziioannou, an astrophysicist at the NYC-based Flatiron Institute, presented the findings at a meeting of the American Astronomical Society in Hawaii on Monday, and said that the collision was estimated to have taken place between 290 million and 720 million light-years from Earth.

But Chatziioannou also noted there were some puzzling aspects to the collision. “It’s clearly heavier than any other pair of neutron stars ever observed,” she explained. “The existence of a system like that challenges our current understanding of how those systems form binaries and merge to give off gravitational waves.”

Scientists say it’s plausible that one of the objects observed in the collision was not a neutron star at all but actually a new kind of never-before-observed lightweight black hole. The one confirmed neutron star in the equation had an estimated mass of between 1.1-1.7 times that of our Sun. The second object’s mass was calculated to have been 2.5 times that of our Sun.

LIGO team leader Nelson Christensen echoed Chatziioannou’s surprise at the discovery. “We’ve never seen any neutron star with this large a mass,” he said. “The question is, is it really a neutron star? If it is, then we’ve detected a really strange heavy neutron star, but if it’s a black hole it’s a really light black hole.”

Previously, the ‘lightest’ black hole ever found, discovered in October 2019, had a mass of about 3.3 times that of our Sun.

The LIGO network monitors the far reaches of our galaxy for cosmic gravitational waves, and when a possible collision of celestial objects is detected, alerts other astronomers and observatories worldwide in an attempt to capture the bright flash of gamma-ray light to confirm that a collision has taken place.

The collision detected last April was not accompanied by any bright flash, with the confirmation that it actually took place picked up only by the gravitational wave detector at the facility in Livingston. According to Chatziioannou, this may mean that the smashing together of the two objects was immediately followed by the creation of a black hole which expanded so quickly that it swallowed up any light before it could escape and beam out into the galaxy.

The observation was LIGO’s second since October 2017, when two neutron stars smashed into one another, creating ripples in the fabric of space-time.

The multinational team’s findings on the latest collision will appear in a future issue of The Astrophysical Journal Letters.

‘They May Be Among Us’: First Briton in Space Helen Sharman Claims Aliens Exist

Another Piece of the Puzzle? Mysterious Radio Signal From Space Detected