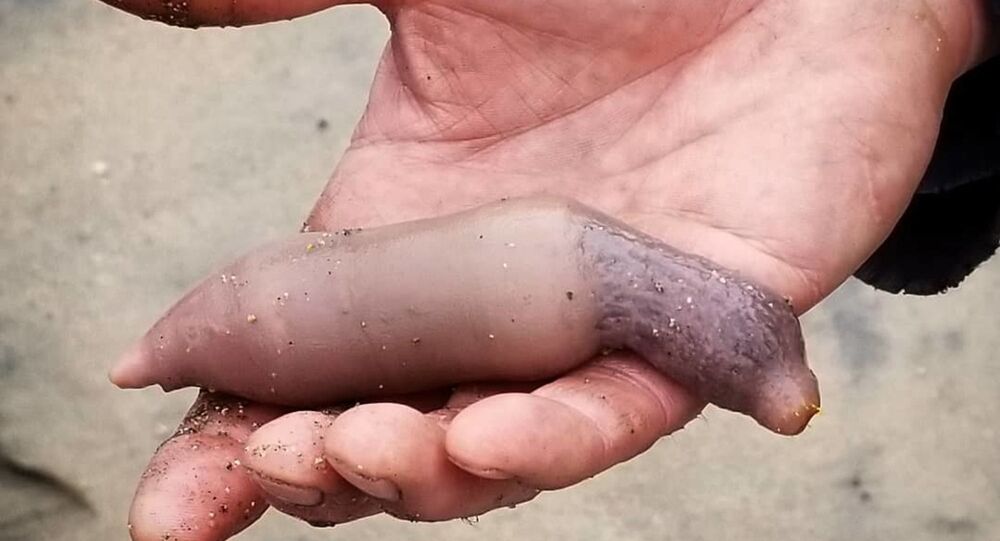 From ‘Penis Fish’ to ‘Roaches Fed Moon Rock’: Five of the Most Bizarre Science Stories of 2019

Discoveries in the realm of science never fail to excite us, offering educative insights into the world around us and in outer space as well. Yet, science reporting does have a more whimsical side to it… 2019 had its share of bizarre scientific stories.

Here are five of the most unusual scientific findings from 2019.

A jellyfish relative, the Mnemiopsis leidyi, made headlines this year, as groundbreaking studies revealed it had a “disappearing” anus.
Prior studies had concluded that the marine creature, also known as a warty comb jelly or sea walnut, possessed a permanent defecation centre.

​But researchers with the Marine Biological Laboratory in Woods Hole, Massachusetts, discovered that the end of M. leidyi's digestive track turned out to be an opening that "appears and disappears" in a regular rhythm.

If you are puzzled as to the practical implications of this research, experts believe further investigations may help explain how permanent anuses evolved in other creatures.

Mnemiopsis leidyi, the “sea walnut”, never ceases to blow me away... irrespective of their (hotly contested) phylogenetic position, they are incredible creatures with lots of amazing biology. #mblneuro @MBLScience pic.twitter.com/SZo7bfjfc8

The research suggested that future alien hunters should watch out for fettuccine or capellini, evoking associations with the delicious pasta dishes.

The reference alluded to pasta-shaped formations accumulating at the edges of hot springs here on Earth, built, in part, by microbes.

This delightful spot is where heat-loving microscopic creatures create mats from calcium carbonate that look like long, mucus-y pasta strands.

If formations of this nature were to appear on other planets, they might fossilise, providing scientists with a glimpse into the workings of alien microbes.

NASA fed some of its lunar samples brought back by the Apollo 11 mission to cockroaches, dumped them in fishbowls and injected mice with the substances from them.

This was done in a spate of little-known but vitally important experiments that ensured lunar samples were safe to keep here on Earth, fearing potentially dangerous germs living on the moon.

© AP Photo / NASA
In this July 16, 1969 photo made available by NASA, the 363-feet Saturn V rocket carrying the Apollo 11 crew, launches from Pad A, Launch Complex 39, at the Kennedy Space Center in Florida.

After Apollo 11, the first mission to land humans on the moon, NASA exposed lunar samples to representative species: Japanese quail for birds, some species of fish, brown shrimp and oysters for shellfish, German cockroaches and houseflies, and even a few plants, grown in lunar regolith.

The Apollo 11 astronauts themselves stayed in quarantine for three weeks following their mission. No lunar microbes were discovered.

‘Blobs’ that Can Think

It turns out that even simple organisms are no stranger to complex decision-making processes. Thus, if exposed to an irritant, the Stentor roeselii, a relatively large, trumpet-shaped, single-celled creature, will try multiple tactics to avoid the unpleasant tactile distraction, according to the study results, published online in Current Biology on 5 December.

These might include stretching around the offending substance, trying to push it away with its hair-like projections called cilia, or contracting itself away from the irritant.

As a last resort, the “blobs” might just swim away.

“Our findings show that single cells can be much more sophisticated than we generally give them credit for,” said corresponding study author Jeremy Gunawardena, associate professor of systems biology in the Blavatnik Institute at HMS.

Wrapping up the year 2019, a spate of storms revealed thousands of phallic marine worms to stunned beachgoers in Northern California.

The creatures, called Urechis caupo, or fat innkeeper worms, and are commonly referred to as “penis fish” for their distinct appearance, are rarely seen because they spend most of their lives buried in the sand. The aforementioned storms had washed away sand from above their burrows, leaving thousands of these worms stranded on the beach.

This may just be the weirdest thing you've seen today!

Thousands of these marine worms, called fat innkeeper worms—or "penis fish"—washed up on Drake's Beach after a recent storm. 🌊 But why? https://t.co/MwY6xkN3kb pic.twitter.com/vGMpSvGoAT

​Needless to say, social media had its say, with users wisecracking their hearts out.