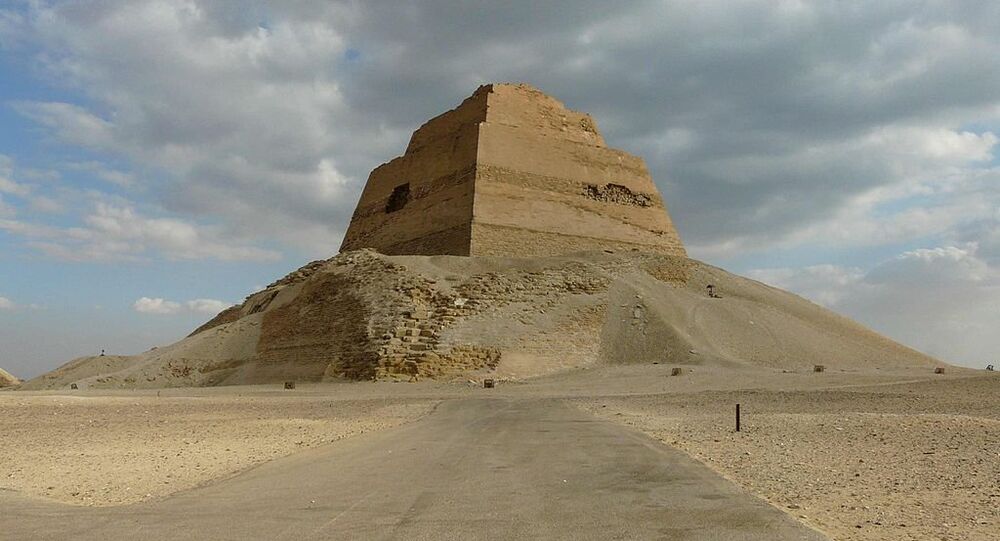 Architects that designed the Meidum believed they had found the secret to the perfect construction for a pyramid. They abandoned the original step structure and used a revolutionary concept, which made the sides of the pyramid smooth.

Archaeologists involved in studying the Meidum pyramid revealed in a documentary titled “Secrets of Archaeology” that they were terrified upon discovering statues of Pharaoh Rahotep and his wife. Researchers said they were afraid because the statues had intense facial expressions, which according to scientists, were "lifelike".

Here's another one; Rahotep's wife with amethyst eyes. She reminds me of Elizabeth Taylor. pic.twitter.com/4b0kUz3X1d

​The history of the Meidum pyramid is no less bizarre. It is thought to have been built for Pharaoh Sneferu, the founder of the Fourth Dynasty, which was established in 2613 BC, and is Egypt’s first straight-sided pyramid. It was originally designed as a step pyramid, like the one built for Pharaoh Djoser. Djoser’s pyramid was the earliest colossal stone building in Egypt.

Later architects abandoned this approach and chose a revolutionary concept that made the lines of the structure “smooth and sloping”. However, apparently they made a mistake in calculations, and the structure collapsed. “The bases of the four external supporting walls fell in, and the blocks of limestone slipped downwards revealing the internal part that we see today”, revealed the documentary “Secrets of Archaeology”.

Pharaoh Sneferu had another pyramid built, which also had an unusual design, as its top section was built at a shallower angle than earned the structure its name – the Bent Pyramid.

Snerferu tried again, with the Bent Pyramid. Halfway through building the Bent Pyramid, the Meidum Pyramid collapsed, and the builders realized that the 54 degree angle they were using was not going to work, so they changed it to 43 degrees. It was the tallest thing for 5 years 3/7 pic.twitter.com/8xZxPjdzvJ