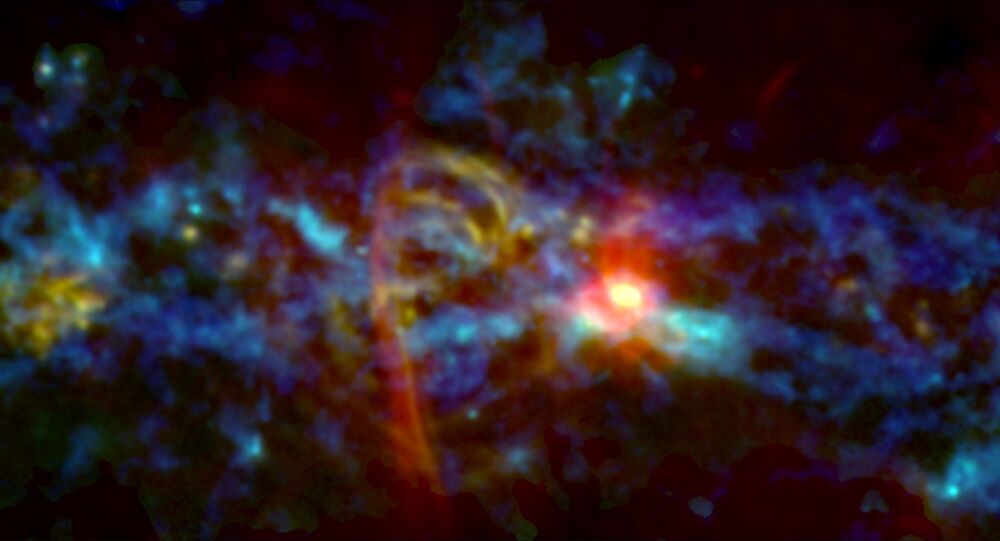 Just like stars, planets, and other space bodies, thin strands of ionised gas called filaments emit radio waves that can be detected by out radio telescopes. This is how the Christmas-themed cosmic structure was discovered.

A giant candy cane was spotted near the heart of our galaxy just in time for the Christmas festivities.

NASA shared a colourful composite image of the cosmic ‘treat’ on Wednesday. It shows Milky Way’s central zone, which has the biggest and densest collection of giant molecular clouds in the galaxy. These contain enough raw material to create tens of millions of stars like our sun, according to the press release.

At the centre of the image is a distinctive red-and-yellow, candy cane-shaped feature. Estimated to span 190 light-years, it is but one of a set of long threads of ionised gas called filaments that emit radio waves.

The image was taken by the Goddard-IRAM Superconducting 2-Millimeter Observer (GISMO), an instrument attached to the 30-metre radio telescope IRAM in Veleta, Spain.

The newly-discovered candy cane is not actually yellow and red because, like the rest of the image, it is shown as seen in infra-red light.

The candy ‘handle’ called Arches represents an area full of ionised gas and well-developed star factories, while Radio Arc, the red area that makes up the straight part, is where high-energy electrons interact with magnetic fields.

The Sickle, a yellowish structure between Radio Arc and Arches, is presumed to be the source of those electrons.

“We’re very intrigued by the beauty of this image; it's exotic,” said Johanne Staguhn, the astronomer who leads the GISMO team at Goddard. “When you look at it, you feel like you’re looking at some really special forces of nature in the universe.”