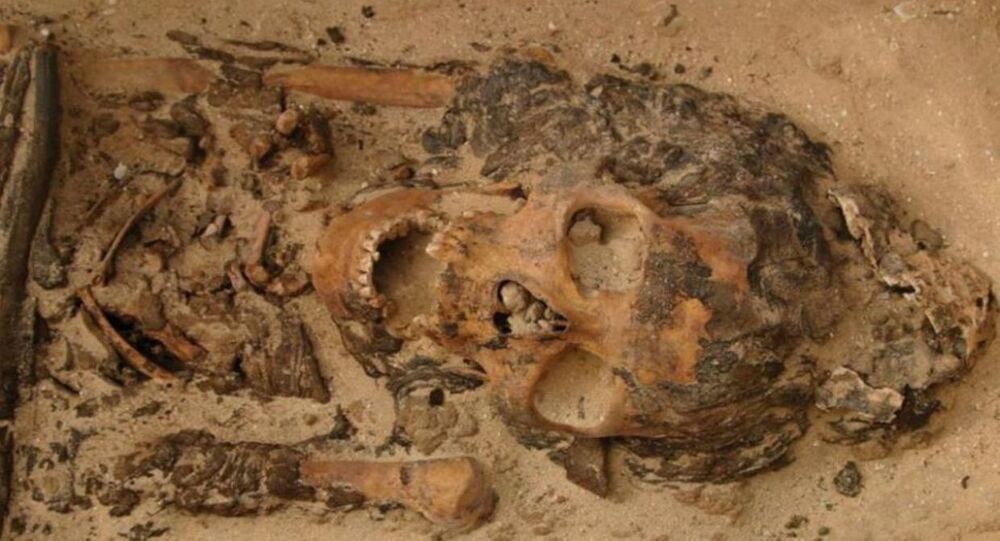 More than 3,000 years ago, Egyptian art often depicted people wearing what look like cones on their heads, something that prompted researchers to wonder whether this kind of garment actually existed.

A team of archaeologists from Cambridge University discovered two head cones on the skulls of two individuals buried in the ancient city of Amarna about 3,300 years ago, according to findings published in the journal Antiquity.

The researchers pointed out that the discovery confirms that three-dimensional wax-based head cones were "sometimes worn by the dead in ancient Egypt", and that "access to these objects was not restricted to the upper elite".

They suggested that the head cones were also worn by the living, “although it remains difficult to ascertain how often and why.”

© Photo : Amarna Project
The cemetery at Amarna where the woman with head cone was buried

The head cones made of wax and fabric were unearthed when archaeologists previously excavated at least 700 graves in Amarna, which was built by the pharaoh Akhenaten and inhabited between 1550 B.C. and 30 B.C.

The first artefact was found in 2010 in the grave of a woman in her twenties, while the second one was discovered in 2015 on a scull of an individual aged 15 to 20 years old.

The scientists wrote in their findings that the Armana discovery will most likely shed more light on the “the nature and role of the cones” which they recalled “have long been debated.”

© Photo : Amarna Project
This woman, who was between age 20-29 at time of death, was found buried with a head cone made of beeswax. She lived more than 3,300 years ago and was buried in a cemetery at the site of Amarna in Egypt

The most popular “interpretation is that the cone is a lump of perfumed unguent that, as it melted, scented and cleansed the hair and body,” according to the researchers.

At the same time, they claimed that their discovery makes this interpretation problematic, given that the cones were made of beeswax rather than unguent, and that no perfume was tracked in the artefacts.

In a separate theory, the researchers suggested that the head cones could be interpreted as “part of a suite of personal accoutrements deemed appropriate for use in a range of celebrations and rituals” involving both the living and the dead.

They were echoed by Lise Manniche, a professor emeritus of Egyptology at the University of Copenhagen, who was not involved in the current study and cited by the livescience website as saying that the Armana discovery is of great importance.

“I would interpret the two cones as 'dummy cones,' used by less fortunate inhabitants in the city as a substitute for the unguent cones of the middle and upper classes. By using these dummies, they would have hoped to narrow the social gap in the next life,” Manniche said.