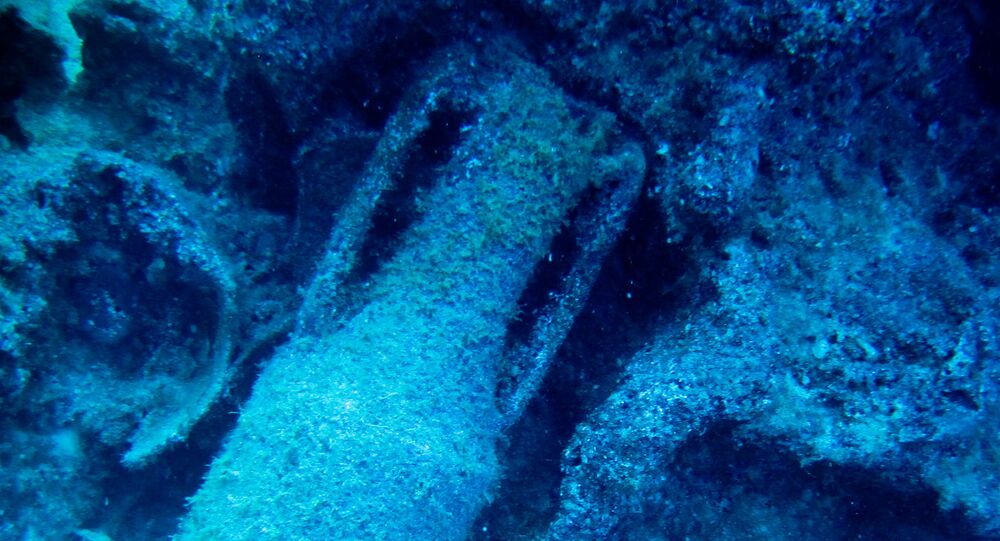 The Mediterranean Sea has proven to be an important source of archaeological findings so far, including such relics as houses, batch complexes, a tomb, a cemetery and several massive ship wreckages dating back to Roman times.

A Roman shipwreck, along with its cargo of 6,000 food and wine pots dating back to the time of Jesus Christ, has been discovered near Kefallinia Island in Greece, according to a study conducted by a group of Greek scholars recently published in Journal of Archaeological Science.

It has been referred to as the “Fiscardo” shipwreck, owing to its close proximity to a fishing port of the same name.

“The shipwreck is dated between 1st century BC and 1st century AD and is one of the largest found so far in the Mediterranean Sea, for that period”, the paper says.

The researchers note that the ship’s cargo, that was probably stowed in its hull in five layers, was “in very good state of preservation” when discovered, containing thousands of amphorae resembling a distinctive type of Roman pot with a narrow neck and two handles.

Approximately 30-metre long, “Fiscardo” is the largest merchant shipwreck found in the east Mediterranean sea so far. It has also been one of the four largest ships discovered in the entire Mediterranean Sea form the same period, with other three finds of an estimated 40-metre length, including “Madrague de Giens”, “Albenga” and the “Machdia”.

© CC0
Shipwreck of One of Jesus' Apostles, St. Paul, Found off Malta, Bible Scholar Claims
The discovery of the wreckage has “significant archaeological potential”, according to the paper, as it not only indicates the importance of the port of Fiscardo at that time, but also helps to understand how a trading route running through the eastern Ionian Sea functioned. The further study of the wreckage may also help to shed some light on other sea and trading routes.

The Fiscardo fishing port has been the home of several outstanding findings so far, including such Romanian relics as houses, bath complexes and a theatre dating between 146 BC and 330 AD.