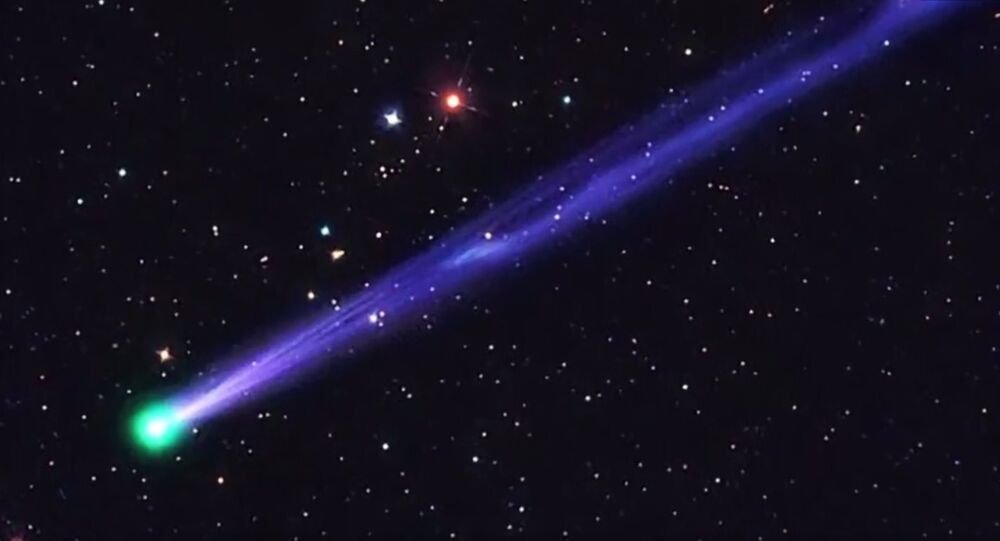 Wirtanen is a small short-period comet that was festively dubbed the "Christmas Comet" in 2018, as it grew bright enough to see with binoculars in dark sky and with the naked eye as it passes through some of the most prominent constellations of the season.

Using data from NASA’s Transiting Exoplanet Survey Satellite (TESS), astronomers at the University of Maryland (UMD), in College Park, Maryland, have captured the most complete and detailed observation ever recorded of a comet's spontaneous outburst.

The team of scientists reported their results in a paper, First Results from TESS Observations of Comet 46P/Wirtanen, published on 22 November in The Astrophysical Journal Letters.

TESS recorded the moment ice and dust exploded from the comet in 2018 as it made its closest pass to Earth.

The burst lasted for 20 days and ejected 2.2 million pounds of dust and ice.

A series of images were used by NASA to create a timelapse of the rare event.

Tony Farnham, a research scientist in the UMD Department of Astronomy and the lead author of the research paper, said:

“With 20 days' worth of very frequent images, we were able to assess changes in brightness very easily. That's what TESS was designed for, to perform its primary job as an exoplanet surveyor.”

The scientist shared his enthusiasm of how fortunate the research team was in terms of timing:

“We can't predict when comet outbursts will happen. But even if we somehow had the opportunity to schedule these observations, we couldn't have done any better in terms of timing. The outburst happened mere days after the observations started.”

The scientist also explained why this particular comet had been singled out for the study:

“Wirtanen was a high priority for us because of its close approach in late 2018, so we decided to use its appearance in the TESS images as a test case to see what we could get out of it. We did so and were very surprised!” said Tony Farnham.

Wirtanen's outburst occurred on 26 September 2018 and happened in two phases.

There was an hour-long flash followed by a more steady second stage that gradually become brighter over the next eight hours after the outburst.

Once it reached peak brightness, Wirtanen began to fade.

The most common comet activity occurs when sunlight vaporises the ice near the surface of the nucleus.

However, many comets, for reasons still unknown to science, experience occasional spontaneous outbursts that can significantly, but temporarily increase the comet's activity.

The researchers have suggested a few possible reasons for this, including a thermal or chemical event on its surface.

Underscoring the significance of the study, NASA said:

“Studies of the outburst behaviour, especially in the early brightening stages that are difficult to capture, can help us understand the physical and thermal properties of the comet.”

While the current study describes initial results, Farnham, Kelley and their colleagues look forward to further analyses of Wirtanen, as well as other comets in TESS' field of view.

“We also don't know what causes natural outbursts and that's ultimately what we want to find,” Farnham said.

“There are at least four other comets in the same area of the sky where TESS made these observations, with a total of about 50 comets expected in the first two years' worth of TESS data. There's a lot that can come of these data.”

Wirtanen was first spotted orbiting the sun by astronomer Carl Wirtanen in 1948, but last year it came within 30 times the distance to the moon, and was dubbed the "Christmas Comet", as it grew bright enough to see with binoculars and, in dark sky, with the naked eye.

Like all comets, Wirtanen is a frozen 4-billion-year-old relic from the formation of the solar system.

Its elliptical orbit takes it out near the orbit of Jupiter at its farthest point from the Sun, and at its closest approach, it’s about the same distance from the Sun as the Earth.

The closest approach to Earth was registered on 16 December 2018 when the comet was just 11.5 million kilometres away, or about 30 Earth-Moon separations. That’s the 10th closest approach of any comet in modern times!

Wirtanen was actually the original target for close investigation by the Rosetta spacecraft, planned by the European Space Agency, but an inability to meet the launch window caused Rosetta to be sent to a different target instead.