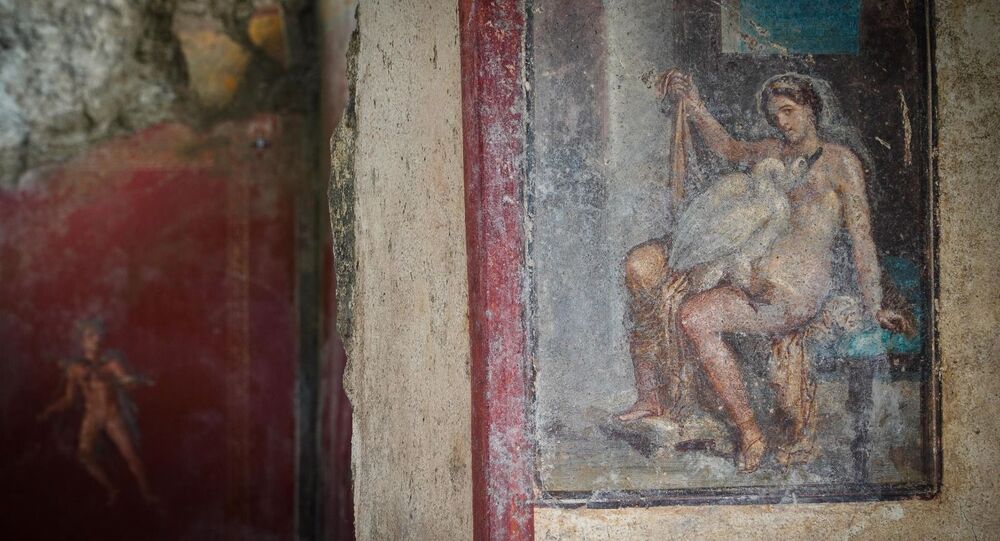 The 54-acre Regio V site in the ancient Roman city of Pompeii is being excavated as part of the Great Pompeii Project and has not previously been open to the public, with about a third of the ancient city yet to be excavated.

The painting, depicting the provocative scene of Leda being impregnated by the Roman god Jupiter disguised as a swan perched on her naked lap, was found last year during excavations of the Regio V site in the ancient Roman city.

Via del Vesuvio, the road on which the upper-class townhouse, or domus, containing the fresco is located, is also being reopened, along with the resored Central Baths and House of the Golden Cupids.

Archaeologists believe the domus belonged to a rich merchant. Adorning a home with myth-inspired frescoes was likely a means to reflect the owner’s high level of culture.

According it, Leda was seduced - some say raped - by Zeus (Jupiter in Roman mythology) while he took on the form of a swan.

The Queen of Sparta was said to have borne children fathered by the god and by a mortal king of Sparta.

According to myth, her children included the beautiful Helen of Troy and the twins Castor and Pollux.

Regio V, a 21.8-hectare (54-acre) site to the north of the archaeological park, is being excavated as part of the EU-funded two-year Great Pompeii Project.

The dig got under way early last year and has been the most intensive at the site since the 1960s.

It is not yet clear when it be fully accessible to the public.

The site has offered up some fascinating finds, such as a fresco depicting fighting gladiators, discovered on a wall beneath the stairwell of what was probably a tavern frequented by gladiators.

Human remains have also been found, including skeletons huddled together in a villa, as well as the remains of a harnessed horse and saddle.

Pompeii was buried under mounds of volcanic ash when Mount Vesuvius erupted in 79 AD.

Discoveries continue there as inscriptions, fine frescoes, and victims of the eruption are unearthed, offering a glimpse into the public and private life in the Roman city.