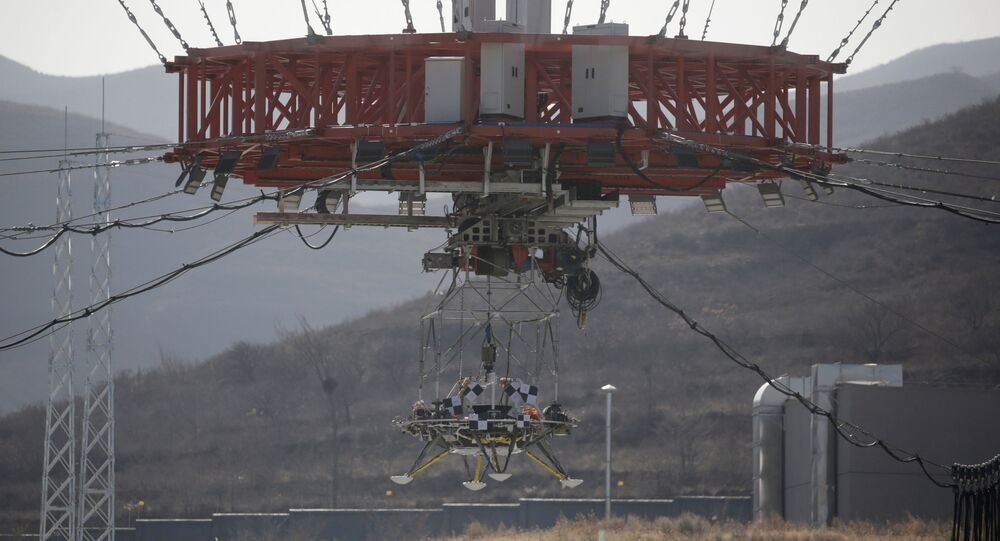 China’s space program tested its Mars lander last week, simulating the conditions faced by craft landing on the Red Planet. Meanwhile, news has emerged that China listened in on the US’ Juno probe, orbiting Jupiter, to test its own deep space communications abilities.

On November 14, the China National Space Administration (CNSA) carried out tests on its Mars lander using a 460-foot-tall tower that recreates the weaker gravity the lander will have to navigate as it descends to Mars, Xinhua News Agency reported.

China Aerospace Science and Industry Corporation (CASIC) posted images of the lander on social media last month, Sputnik reported. The mission is slated to launch in 2020 and arrive on Mars in 2021, and will encompass not only orbiting Mars, but landing on it and deploying a rover as well. Previous missions by the US and other countries have only attempted one of these steps at a time.

The orbiter and rover both carry instruments for communication and measurement, including high-resolution cameras, spectrometers and tools for measuring the Red Planet’s magnetosphere, among other things, Spaceflight Now reported. The rover is designed for a three-month mission once it rolls off the lander.

In addition to its Mars mission and many moon missions, CNSA has planned another mission to Mars with the intention of returning samples to Earth, a comet rendezvous mission that would also return samples and a 2030 mission to Jupiter.

A recently unearthed report has revealed that China used signals sent by the Juno probe orbiting Jupiter, operated by the US space agency NASA, in order to sharpen its deep space communications skills in preparation for its own future missions.

When NASA’s Juno probe in orbit around the planet Jupiter sent signals back to Earth 560 million miles away in 2018, it wasn’t just NASA's Marshall Space Flight Center in Huntsville, Alabama, that was listening in: Chinese astrophysicists tuned in, too, in an effort to fine-tune their tracking, telemetry and command (TT&C) capabilities.

According to a Chinese academic paper published in 2018 in the Journal of Deep Space Exploration and recently uncovered by SpaceNews, scientists were able to detect Juno’s signals in the 35-meter-diameter dish at Kashi station in Xinjiang, correctly determining at what altitude the space probe was orbiting the solar system’s biggest planet.

As the outlet explained, the Juno probe uses X-band and Ka-band radio waves to communicate with NASA scientists back on Earth, and the wavelength of the transmissions helps them to measure Jupiter’s gravitational field more accurately than ever before. That’s what the Chinese scientists looked at, too: they were able to identify the orbital path Juno followed by detecting the subtle shifts in its signals.

However, the eavesdropping wasn’t nefarious and didn’t cause any problems, an expert told SpaceNews.

Brian Weeden, director of program planning at the Secure World Foundation, told the outlet it was “like a ham radio operator trying to tune into the most distant signal they can to test out the sensitivity of their equipment. Juno is broadcasting its carrier signal back toward the Earth, and it’s an open signal, by design. Anyone, even hobbyists, who happen to have a powerful enough antenna can pick it up.”

David C. Agle, a spokesperson for NASA’s Jet Propulsion Laboratory, said that NASA regularly provides the public with access to data from programs like Juno, so as long as the Chinese don’t try to control the space probe or interfere with its functioning, this was a harmless action.

Juno has been orbiting Jupiter since 2016, during which time it’s sent back tons of incredible photographs of the enormous planet in addition to measuring its size, composition, magnetic and gravitational fields and myriad other items of scientific importance. Its final mission, likely in mid-late 2021, will be to crash down into Jupiter’s endless clouds, sending back info to Earth all the while.