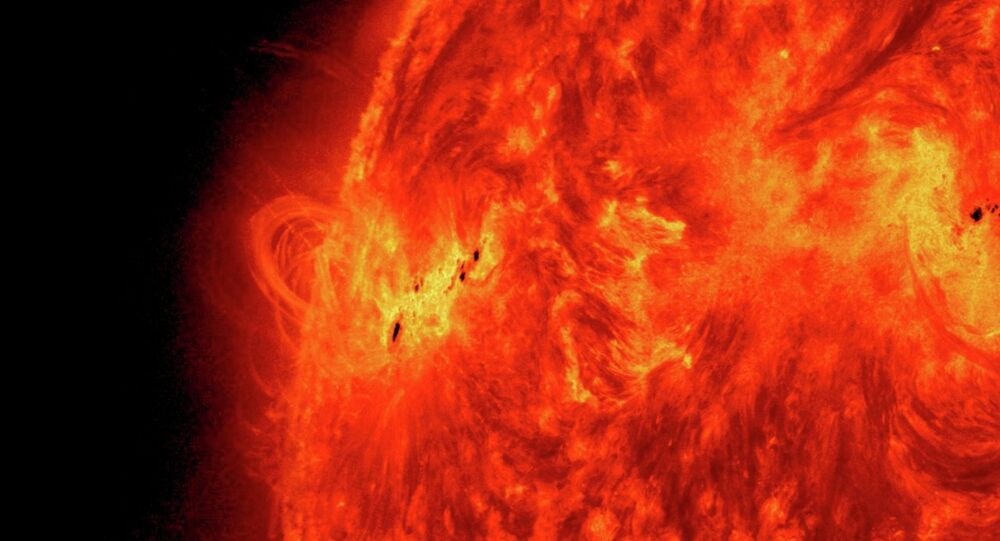 For the first time ever, the ‘sound’ made by electrically charged particles from the Sun’s atmosphere as they approach to pummel Earth’s protective magnetic field during a solar storm has been recorded.

The recording was made possible thanks to the ESA’s Cluster II mission probes –a formation of four craft in elliptical orbit around our planet which have been engaged in magnetospheric research for nearly two decades now, and to researchers back on Earth.

The ‘sounds’ featured in the clip were generated in 2003 and 2005, as the Cluster II probes captured the moment solar particles hit Earth’s magnetic field during the bout of space weather. The magnetic wave frequencies were more recently transformed into audible signals, which the ESA described as “an uncanny song that might recall more the sound effects of a science fiction movie than a natural phenomenon.”

The discovery was made by a research team led by Lucile Turc, a research fellow at the University of Helsinki’s particle physics & astrophysics space physics research group. The group discovered the unique event after analyzing data from the Cluster II’s massive Science Archive, comprising a comprehensive databank from the Cluster II programme’s years of recordings.

As they approach our planet, solar waves run into the so-called foreshock, the first region of the magnetic field. After that, they run into a second barrier – known as the bow shock, a magnetised region which helps slow solar wind down. After hitting the magnetic field, the solar waves are resonated, transmitting the magnetic disturbance to the ground. According to the ESA, it takes a total of about 10 minutes for waves generated at the foreshock to reach our planet.

The ESA launched the Cluster II mission in the year 2000 aboard Soyuz-U rockets at the Baikonur Cosmodrome in Kazakhstan.

Earlier this year’s NASA’s THEMIS space probes released separate ‘audio’ of Earth’s magnetic field in action, revealing it to sound like something akin to a heartbeat or a gelatin-filled drum.

Intense flares of solar wind have long been feared by scientists, given their potential to cause extensive damage to man-made infrastructure, from spacecraft to satellite instruments to entire power grids. Recently, after it was discovered that the magnetic North Pole was leaving the Arctic and heading to Russia’s Siberia at an accelerated pace, scientists began to express concerns about the possible flipping in Earth’s magnetic polls, which it has been feared could temporarily and catastrophically weaken the magnetic field. In 2011, US scientists calculated that a repeat of a deadly solar storm like the one that hit the planet in 1859 today could result in up to $2 trillion in damage and take up to a decade to recover from.