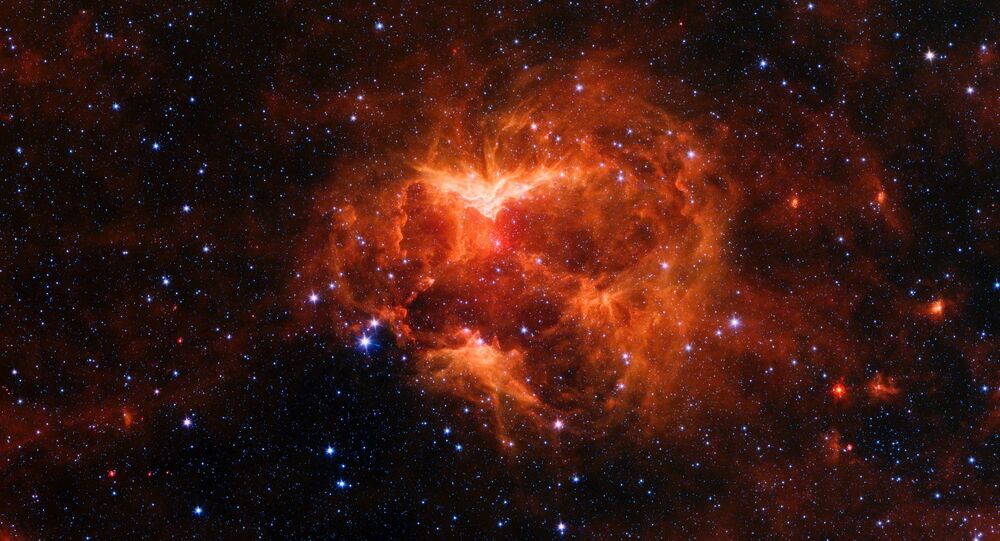 The US National Aeronautics and Space Administration (NASA) decided to contribute to the ongoing Halloween celebrations around the world, by posting an image of a bizarrely-shaped cosmic nebula.

The US space agency sparked a full-blown Halloween mood among social media users this Wednesday, by posting a magnificent image of a gas and dust cloud surrounding a massive star taken by NASA's Spitzer Space Telescope, which curiously resembles a cosmic pumpkin.

It takes more than a candle to light this cosmic pumpkin. 🎃 In this image from @NASASpitzer, a massive star in the center of a cloud of dust and gas creates what researchers have nicknamed the "Jack-o-lantern Nebula." Look closer: https://t.co/fL1pT4vdJO pic.twitter.com/4p9qB6rc3k

Scientists, who nicknamed the extraordinary structure the “Jack-o’-lantern Nebula”, believe that the massive O-type star in the centre is likely to be responsible for the creation of the pattern. While an outflow of radiation and particles from the star sweeps the surrounding dust and gas out, it helps to create the peculiar hollows that resemble a carved face.

© NASA . JPL-Caltech
This infrared image from NASA's Spitzer Space telescope shows a cloud of gas and dust carved out by a massive star. A drawing overlaid on the image reveals why researchers nicknamed this region the "Jack-o'-lantern Nebula."

At the same time, the colours in the image can be explained by the combination of three wavelengths of infrared light, with green and red colours representing light released by dust radiating at different temperatures. The central O-type star, which is believed to be about 20 times heavier than the Sun, is seen as a white spot in the centre.

NASA said that the data used for the creation of image was collected during the previous Spitzer “cold mission”, that ran between 2004 and 2009.

Previously the space agency posted a scary-looking picture of the Sun that also vividly resembled a jack-o’-lantern, a symbol of the Halloween season on their Facebook page, that image was taken by NASA’s Solar Dynamics Observatory back in 2014.