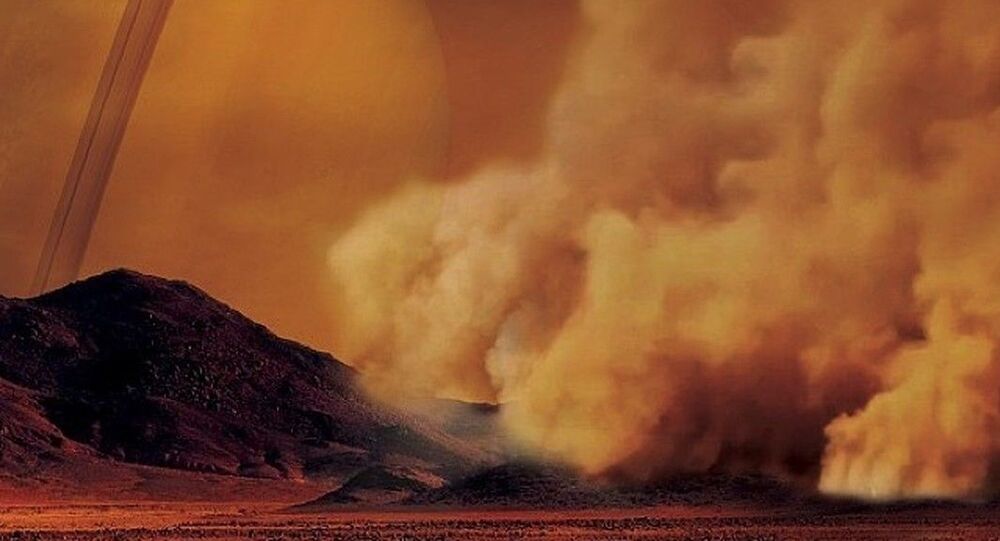 Titan’s sand dunes, which were earlier discovered by NASA’s Cassini spacecraft, reach heights of almost 100 metres and spread across more than 10 million square kilometres of the Saturn moon’s surface (for comparison's sake, the Sahara Desert is 9.2 mln square kilometres in size).

Scientists have discovered new evidence suggesting that the sand dunes on Saturn’s largest moon Titan were formed by galactic cosmic rays rather than rainfall.

In a study published by the journal Science Advances, researchers from the Manoa-based University of Hawaii pointed out that they made the conclusion when analysing the previous theory that Titan’s atmosphere includes certain organic molecules, made up of long chains of carbon atoms.

The theory, which is based on data obtained by the Cassini space probe, claims that the organic molecules fell from the atmosphere and finally formed Titan’s dunes, which cover part of the equatorial region of the Saturn moon’s surface.

The researchers, however, suggested that the dunes could have been formed by a chemical reaction, namely, the sunlight’s action on methane and nitrogen in Titan’s thick atmosphere.

They tested their new theory by bombarding batches of acetylene ice, which can be found on Titan, with high-energy electrons similar to the radiation that reaches Saturn's biggest moon.

During the experiment, the scientists also heated the ice until it sublimated and left behind material made of polycyclic aromatic hydrocarbons (PAHs), which are similar to those organic molecules thought to have created Titan's dunes.

“This is against conventional wisdom, because scientists think that to form aromatic structures you need high temperatures like combustion”, the University of Hawaii’s Ralf Kaiser pointed out.

The researchers believe that the new theory, which is yet to be proven, may help shed more light on why other planets and moons without an atmosphere, including Pluto and Makemake, have huge sand dunes.

Ralph Lorenz at Johns Hopkins University in Maryland, for his part, underscored that “bottom line, we don’t know exactly what the sand is and we don’t know how it got there”.

In this vein, NASA’s plans to send the Dragonfly mission there in 2026, are expected to shed more light on Titan’s dunes.