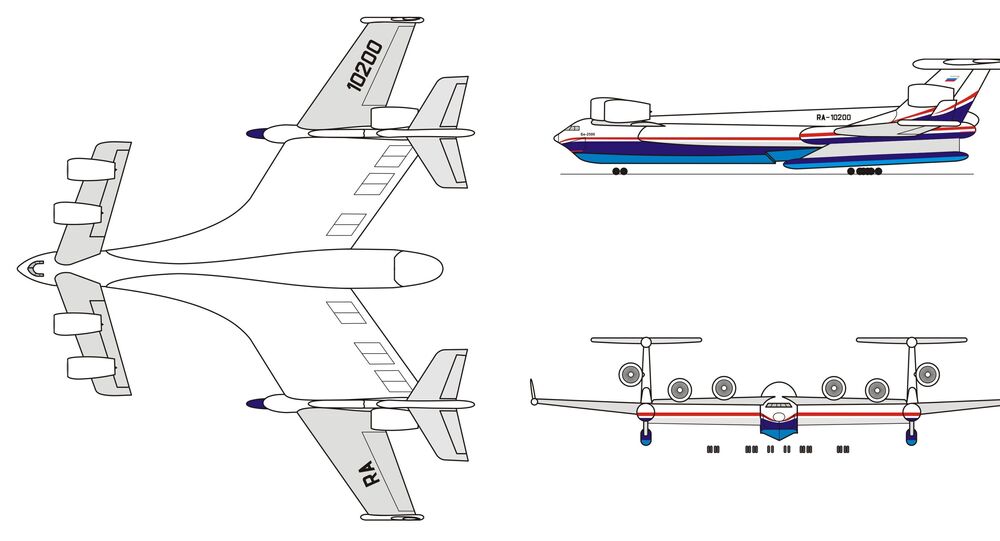 The futuristic plane is being developed by the Beriev Aircraft Company, an aircraft manufacturer specialising in amphibious planes, and a subsidiary of the United Aircraft Corporation.

Russian designers are working on an amphibious aircraft with a maximum takeoff weight of over 1,000 tonnes, well over twenty times that of the massive Beriev Be-200 series of amphibious aircraft, the press service of the United Aircraft Corporation has announced.

“The Beriev Aircraft Company is working on projects of future amphibious aircraft with a takeoff weight of over 1,000 tonnes. Such aircraft can deliver cargo and passengers across great distances at altitudes and speeds inherent in aircraft, using the transport infrastructure of existing maritime ports,” the company said in a press release.

The company did not clarify which project it was talking about. However, in the past, the company was known to have floated the concept of the Be-2500, a super-heavy seaplane with a planned maximum payload of up to 1,000 tonnes, a maximum takeoff weight of 2,500 tonnes, a wing span of 125.5 meters, a length of 115.5 meters, a top speed of 800 km and a projected range of 16,000 km.

Several iterations of the Be-2500 have been proposed since preliminary design work began in the 1980s, with the aircraft speculated to share some design principles, such as fuselage-mounted engines near the cockpit, with the Lun-class ekranoplan, a Soviet ground effect vehicle designed to glide over the water’s surface branded by the CIA as the ‘Caspian Sea Monster’. Unlike the ekranoplan, however, the Be-2500 concept was designed to be able to operate in both high altitude and wing-in-ground flight modes.

On Tuesday, Beriev celebrated its 85th birthday, with the company founded in Taganrog, southwestern Russia in 1934 by Georgy Beriev, a Soviet Georgian general and military and aeronautical engineer. The company specialises in multipurpose amphibious aircraft, including the Be-200, a large amphibious aircraft designed for firefighting, search and rescue and maritime patrol missions.

In 2016, Beriev began production of the Be200ES, a heavily modernised version of the aircraft whose production required the modernisation of production capabilities, including the purchasing and creation of new equipment, the modernisation of workshops, and the recruitment and training of new staff. The Be-200 and its variants are operated by the emergency situations ministries of Russia and Azerbaijan, and several have been ordered by companies in China, Chile and the United States.