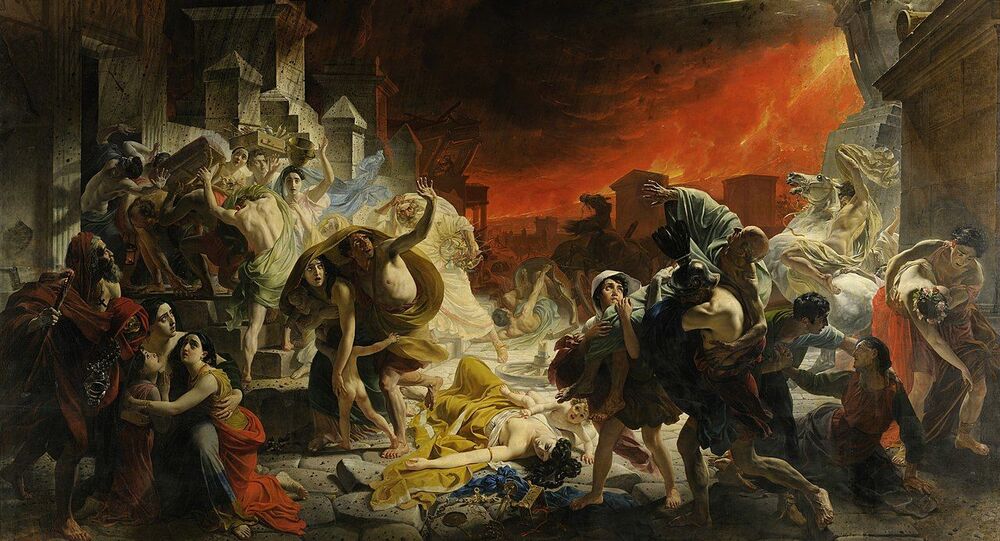 The fragments of data contained in the inscription might help scientists learn details about Pompeii, including the approximate number of people who lived there.

A discovery made by archaeologists at the ancient Roman city of Pompeii, which was buried in volcanic ash during the Mount Vesuvius eruption in 79 AD, offered researchers new insights into the life of the settlement before its destruction, Live Science reports.

According to the media outlet, the find in question is an inscription that was discovered on the wall of a tomb back in 2017 and got deciphered recently, with Massimo Osanna, director general of the Archaeological Park of Pompeii, publishing a paper about it in the annual Journal of Roman Archaeology.

Part of the inscription describes a banquet organized by the wealthy man to whom the tomb apparently belonged, to mark his coming-of-age, with the party being served "on 456 three-sided couches so that upon each couch 15 persons reclined."

As Osanna explained, this information might help determine how many people lived in the city back then, as those in attendance were likely all “adult males with political rights” who made up about 27 to 30 percent of Pompeii's population, with the estimated total number of Pompeii residents thus being about 30,000 people.

The gladiatorial games held by the wealthy man was "of such grandiosity and magnificence as to be able to be compared with [that of] any of the most noble colonies founded by Rome, since 416 gladiators participated."

Another part of the inscription mentions a famine, when the wealthy man organised free bread distribution and sold wheat at a discount to help his fellow citizens.

And yet another portion of the inscription tells of a riot that broke out during a gladiator show about 20 years before the Vesuvius’ eruption, when Emperor Nero "ordered that they [Roman authorities] deport from the City beyond the two-hundredth mile all the gladiatorial households [schools]” as punishment.

The inscription also mentions that the emperor ordered several Pompeii citizens involved in the riot to leave the city, and that the wealthy man actually managed to persuade Nero to allow some of the deported to return.

According to Osanna, the identity of the wealthy man wasn’t immediately clear as his name was likely carved into the now-destroyed part of the tomb, leading the scholar to speculate that the person in question might’ve been one Gnaeus Alleius Nigidius Maius who lived around AD 59.

Osanna also remarked that the translation of the inscription is preliminary, and that further research might yield more information about it, the media outlet notes.