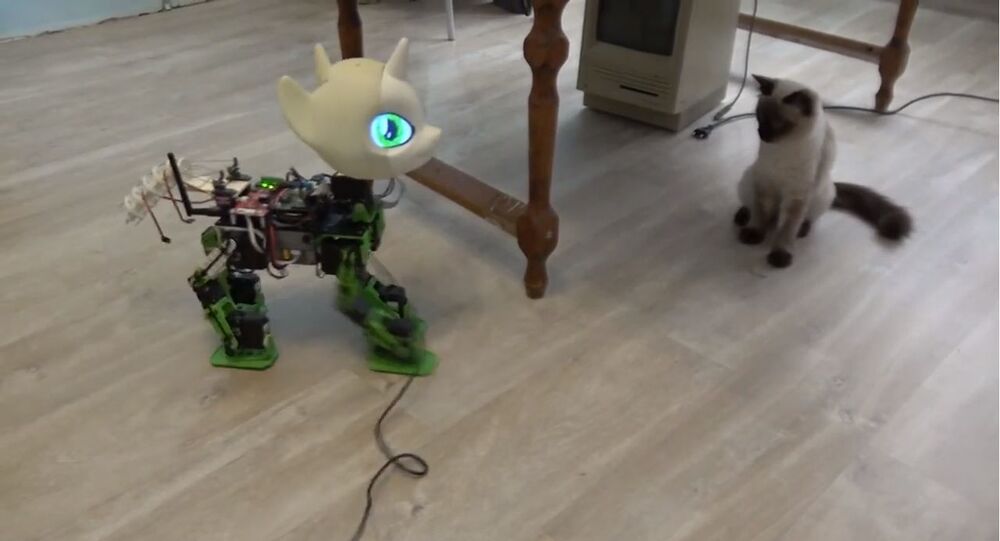 The cat in the video is clearly baffled as to how to react to the walking pony-shaped creature with servos and big glowing eyes.

A group of Russian tech enthusiasts uploaded a video showing a cat reacting to a home-made robot inspired by Hasbro’s ‘My Little Pony’ franchise.

In the video, the robot, named ‘Sweetie Bot’ - a reference to the fan-made ‘Friendship is Witchcraft’ parody series – makes its first steps after the team implemented a fully-working walking routine in their project.

The project began on a wave of global popularity for the ‘My Little Pony: Friendship is Magic’ animated series and remains a work in progress.

Created from scratch, the robot runs on an Arduino programmable controller, and sports a 3D-printed ‘pony’ head with eyes made of two colored LCD displays. While receiving general control from a remote control unit, the robot processes walking, turning and crouching movements autonomously. Unlike many  big corporate robot projects, Sweetie Bot is a completely amateur enterprise.

The robot in the video is the Sweetie Bot project’s second revision and is acting as a testbed for a more streamlined third revision which will feature a full 3D-printed body imitating the My Little Pony branded figurine.

​On their website, the team says the project will be completely open source, with all programming, assembly and printing instructions uploaded online once the device is complete.

I honestly have to say that @SBotProject has created the most adorable robot I have ever seen. pic.twitter.com/ZNTZ0mzOE5

​In 2010, US toy maker Hasbro hired artist Lauren Faust to restart the franchise, originally created in 1981. Thanks to Faust’s vision, the franchise exploded into a massive global following, particularly among young men, in an apparent subversion of Hasbro’s target audience of pre-school girls. The 9th and final season of the show premiered in April of this year and is expected to wrap up 12 October.