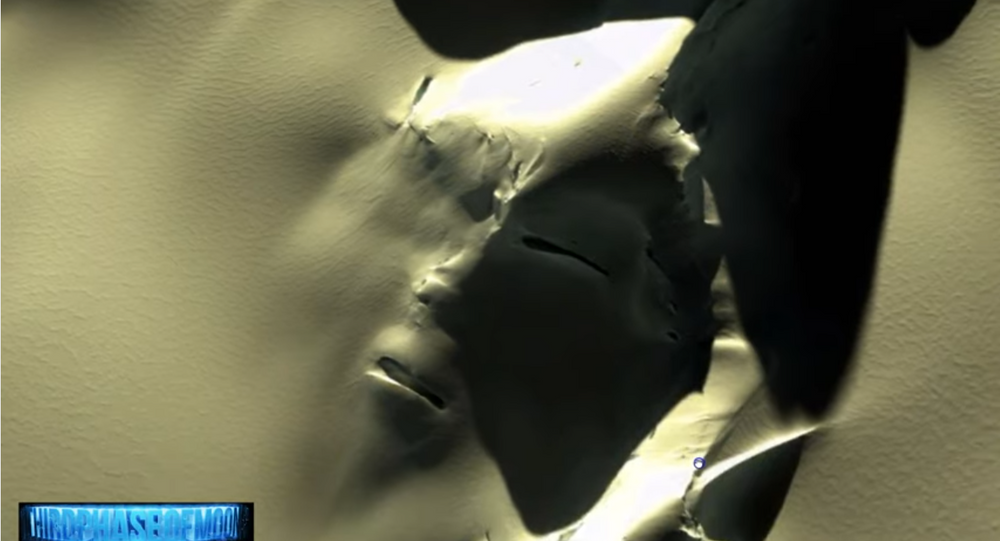 A UFO conspiracy theory-themed Instagram account claims to have discovered a huge face of what is believed by many commenters to be an alien as they zoomed in on the mysterious sight on Google Earth in Antarctica.

An unidentified creator of a popular Instagram account, ufo_scandinavia, has uploaded a video, whose authenticity is yet to be verified, of what he claims is a "grey alien face" that he captured while browsing Google Earth's map of Antarctica.

The footage, which appears to show a bizarre structure that has a mouth, nose and eyes, quickly went viral, as the conspiracy channel has over 15.5 thousand followers.

This was picked up by a YouTube channel, thirdphaseofmoon, which claims to have checked the coordinates and found the exact same face.

"It appears to be a massive, ancient structure of some kind of face that is being revealed for the first time on Google Earth. I would have to concur that whatever we're looking at resembles some sort of megastructure", one of the creators said.

His co-creator then wondered whether this could be something that "was left behind by the ancient civilisations of Antarctica".

"Ice melting could be revealing structures that would baffle the world", he added.

Users have flooded the comment section, penning things such as: "I always knew that Aliens built Earth. We are living on a giant computer. This is the final piece of proof"; "No mind trick, that's definitely a face"; and "This enormous structure which resembles the face of a sleeping Alien, is or was perhaps thousands of years ago the entry to ET mother ships".

Others chimed in by saying: "That is not a natural thing that mother nature made by wind and cold. Looks like a Viking. Metal helmet with the nose piece running down the upper part", or "It’s not man made. Aliens!"

Some even said that they had personally checked the coordinates and found the face.