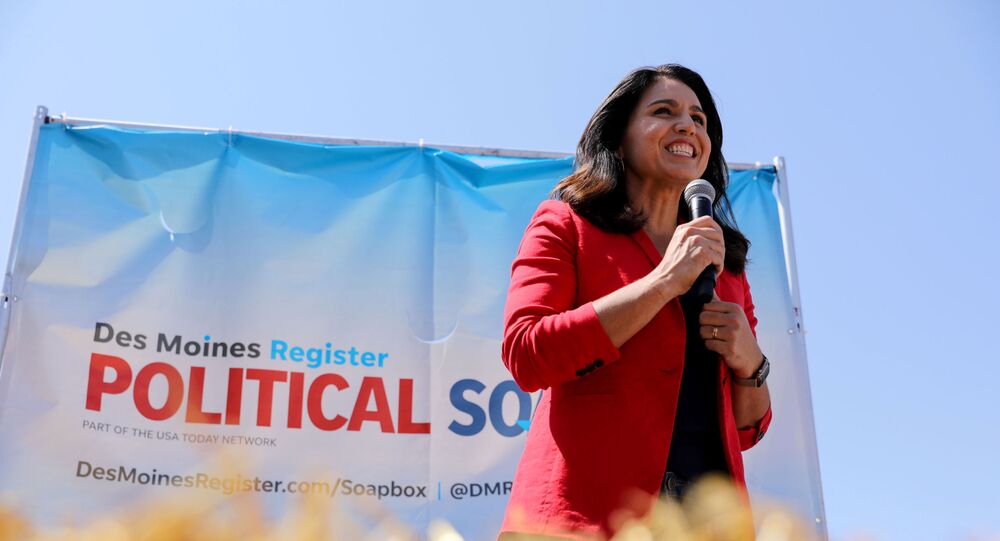 Tulsi Gabbard, a vocal proponent of breaking up the tech monopolies, had her campaign’s advertising account suspended by Google after the Democratic debate in late June and is currently seeking $50 million in damages.

Zach Vorhies, a former Google employee who has been leaking documents suggesting political biases within the company, has rendered assistance to the representatives of 2020 Democratic candidate Tulsi Gabbard, who is suing Google for disabling her search ads account.

In an open letter on the social media network Minds, Vorhies said that he had investigated the suspension of the Google account of conservative thinker Jordan Peterson in 2017.

He wrote: “What I found was that Google had a technical vulnerability that, when exploited, would take any gmail account down. Certain unknown 3rd party actors are aware of this secret vulnerability and exploit it.”

According to the whistle-blower, “malicious actors” would change one letter in a target’s email address to create a “spoof” account and repeat this process until there is a network of bogus accounts.

These accounts, not linked with the original one in any way except for their similar name, would then start generating spam emails, triggering an AI system which fixed the problem by taking down the spam accounts and also Jordan Peterson’s original account.

“To my knowledge, this bug has never been fixed,” Vorhies said. “When Google says an account was deactivated because of ‘suspicious’ activity, this is how they often do it.”

While his revelation does not mean that Google itself was behind the scheme, it indicates that the company had failed to address the vulnerability in a timely manner.

He suggested that this knowledge may be of use to Tulsi Gabbard’s attorneys.

The Hawaii congresswoman’s 2020 campaign advertising account went offline for six hours shortly after the first Democratic debate on 27 and 28 June, cutting her campaign site off from millions of potential voters.

Gabbard, who is campaigning against online censorship and calls for the breakup of big tech monopolies, accused Google of suppressing her voice and filed a lawsuit against the company in federal court.

TULSI2020: In the hours following the 1st debate, while millions of Americans searched for info about Tulsi, Google suspended her search ad account w/o explanation. It is vital to our democracy that big tech companies can’t affect the outcome of elections https://t.co/n7Y7y2dQZ9

In the lawsuit, her campaign team said Google had “not provided a straight answer” as to what happened, and is seeking $50 million in damages and  an injunction to stop the company from “further inter-meddling” in the 2020 election.

Google reportedly cited “problems with billing information or violations of our advertising policies,” later stating there was “suspicious behaviour in the payment activity in your account” before reinstating it.

Media watchdog Project Veritas has recently revealed Vorhies as a Google insider, who had leaked internal documents exposing how its decision-makers discussed cracking down on conservative commentators.

He has also leaked what he called a “black list” of over 400 websites – among them conservative news sites – aiming to exlude them from appearing on news feeds for some Android Google products.

Google maintains that its search algorithms cannot determine the nuances between different agendas and therefore are devoid of a political bias.

Vorhies, however, told Project Veritas that he had been collecting the documents for over a year after he “saw something dark and nefarious going on with the company”.

He was eventually unmasked by an anonymous account which he believes was run by a Google employee, and was approached by police for a “wellness check” after a call from his employers.

“[T]his is a large way in which [Google tries to] intimidate their employees that go rogue on the company,” he was quoted as saying.

Last week, he reportedly turned over 950 pages of documents about Google’s alleged political bias to the Department of Justice.

“It will be so revolting that it doesn’t matter what the solution is, a solution will just form as a reaction to this manipulation they have done,” he said.