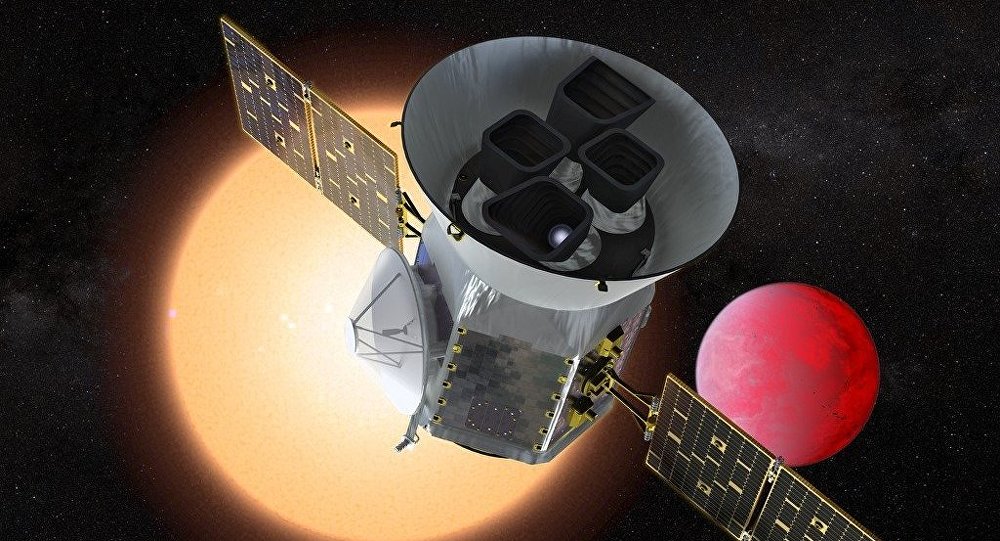 NASA’s Transiting Exoplanet Survey Satellite (TESS) has discovered a total of three planets surrounding a star located some 73 light-years away from our own solar system, and one of them has a composition comparable to Earth.

On Monday, four days after announcing the completion of TESS’ first year of survey, NASA revealed the telescope had produced a “hat trick” of sorts and detected three exoplanets that the administration says will be “among the most curious targets for future studies.”

All three worlds orbit around an M-type dwarf star situated approximately 73 light-years away. Labeled TESS Object of Interest (TOI) 270, the star is said to be approximately 40% smaller than our Sun in both mass and size, and has a “surface temperature about one-third cooler than the Sun.”

The first and innermost planet, dubbed TOI 270 b, measures 25% larger than Earth and has an estimated mass 1.9 times that of our planet. Being that it’s the closest of the three to TOI 270, the planet is described as an “oven-hot” world and is more than likely rocky on the surface.

NASA’s Goddard Space Flight Center/Scott Wiessinger
This infographic illustrates key features of the TOI 270 system, located about 73 light-years away in the southern constellation Pictor. The three known planets were discovered by NASA’s Transiting Exoplanet Survey Satellite through periodic dips in starlight caused by each orbiting world. Insets show information about the planets, including their relative sizes, and how they compare to Earth. Temperatures given for TOI 270’s planets are equilibrium temperatures, calculated without the warming effects of any possible atmospheres.

The release calls the other two worlds “mini-Neptunes,” but researchers say additional data on TOI 270 c and TOI 270 d is needed, as these planets are nothing like those seen within our own solar system. TOI 270 c and TOI 270 d, respectively, register as 2.4 and 2.1 times larger than Earth. The former is said to weigh around seven times Earth’s mass, while the latter is an estimated five times Earth’s weight.

When @NASA_TESS peered at nearby star TOI 270, scientists found three intriguing new worlds — one slightly larger than Earth and two unlike any in our own solar system! Scientists hope to understand how the system formed and learn more about these planets. https://t.co/1DAmW96riX pic.twitter.com/r7kP3Bz2tH

TESS has encountered over 850 “potential new planets,” but only 24, including the latest three, have earned the honor of being called a planet since the satellite first began seeking out exoplanets in July 2018.

“The pace and productivity of TESS in its first year of operations has far exceeded our most optimistic hopes for the mission,” said George Ricker, TESS’ principal investigator at the Massachusetts Institute of Technology.

Researchers hope follow-up observations in relation to TESS’ finds will continue to shed light on how these planets operate, what gases are present on them and whether or not life as we know it can survive on these worlds.

Having spent the past year in the southern space sky, TESS is scheduled to head north in the next year. At the end of the satellite’s northern mission, TESS will have covered over 85% of the sky, according to Business Insider.