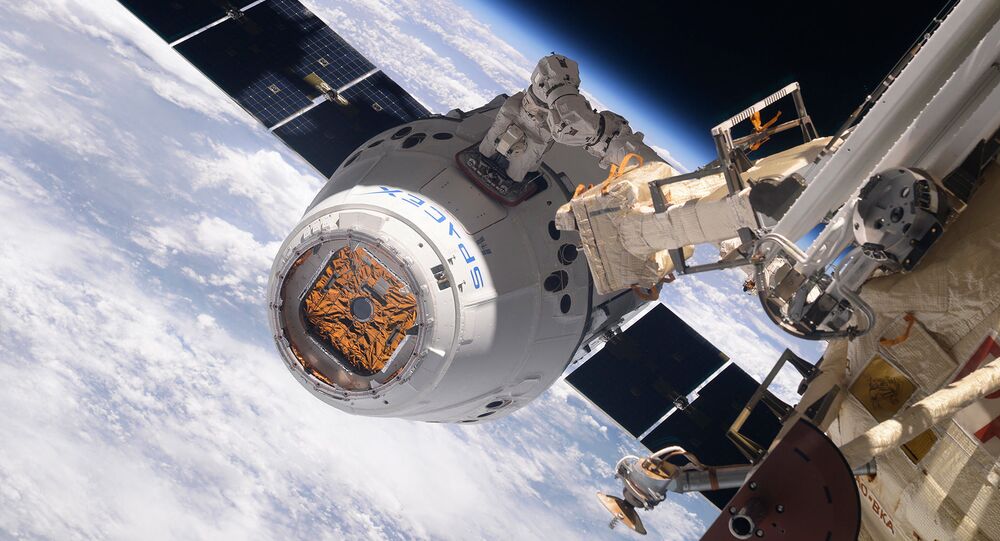 WASHINGTON (Sputnik) - The Dragon unmanned spacecraft of the US SpaceX private company has docked to the International Space Station (ISS) with about 2.5 tons of cargo on board, NASA said.

"We captured the Dragon! At 9:11 am ET (13:11 GMT), astronauts Nick Hague and Christina Koch use the ISS’s robotic arm, Canadarm2, to grab SpaceX’s Dragon cargo vehicle while our orbiting laboratory was travelling more than 267 miles over southern Chile", NASA posted on Twitter.

Now captured, ground controllers will send commands to begin the robotic installation of @SpaceX's #Dragon cargo craft to the bottom of the @Space_Station’s Harmony module. Live coverage of installation is set to resume at 11am ET at https://t.co/mzKW5uV4hS. Ask ?s using #AskNASA pic.twitter.com/bhFaJPz9Mj

​The Dragon unmanned spacecraft was launched on the Falcon 9 carrier rocket from Space Launch Complex 40 at Cape Canaveral Air Force Station at 6:01 p.m. local time (22:01 GMT). NASA streamed live how the spaceship approached and docked to the ISS.

The mission is SpaceX’s 18th cargo flight to the space station under a Commercial Resupply Services contract with NASA. Dragon will remain in the orbit for just over a month. As of today, it is the only spacecraft capable shipping cargo both to and from the ISS.