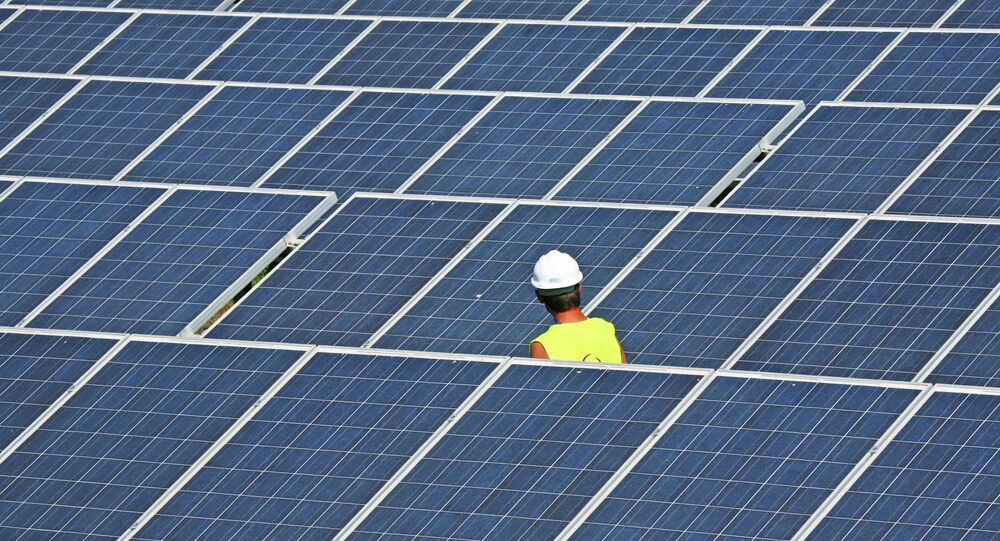 Researchers from around the world have been working on solar energy conversion to electricity by photovoltaic panels for decades. Many experts believe that humankind is currently on the brink of a revolution in solar power technology, with perovskites now being used in solar panels alongside conventional silicon-based tech.

A Sputnik reporter has spoken with Eugene Katz, professor at the Ben-Gurion University of the Negev (Israel) and expert in photovoltaics and solar power, on how solar panels will work in the near future and what to expect from solar technology.

Sputnik: Professor Katz, there has been much talk about perovskites in recent years. Back in 2016, there were predictions that 2017 would be a turning point for perovskite solar cell technology. Did this revolution materialise? Why do perovskites attract so much attention?

Eugene Katz: We are witnessing a major evolutionary leap, if not a revolution, in the technology for obtaining effective solar cells using metal halide perovskites, a new family of organic-inorganic semiconductors.

In 2007, the efficiency of these devices didn’t exceed 3%, but today it is above 24%, which is essential for the solar energy sector. This is a major achievement approaching the top efficiency rates of today’s most widespread solar cells that are based on crystalline silicon.

There is a common understanding that perovskite-based solar cells will be quite cheap since all the active layers in these thin-film devices can be printed from soluble compounds.

But this is not what makes this new technology so attractive. Today’s manufacturing is dominated by silicon-based solar panels that have reached their maximum efficiency, making it unclear where to move on further.

The development of perovskite cells has changed the situation, paving the way to attempts to create the so-called dual-junction, or tandem, perovskite/silicon cell consisting of two sub-cells with perovskite on top (closer to the sunlight-capturing surface) and with a silicon sub-cell on the bottom.

What makes this solution so attractive is that adding the cheap perovskite sub-cell does not increase the cost of the entire tandem all that much, while greatly enhancing its efficiency. Today’s silicon cells have a record efficiency of ~26%, while the perovskite/silicon tandem devices have already achieved an efficiency of 28%, thus exceeding a “psychological” barrier of sorts. The prospects of raising the efficiency of tandem elements to 30%-35% can now be discussed.

The revolution will come when this happens. That is what this all is about. It is for this reason that hundreds, if not thousands, of laboratories around the world are working on this issue and investing heavily in research and manufacturing industrial and semi-industrial prototypes.

Sputnik: What are the obstacles on the way to a perovskite revolution?

Eugene Katz: In my opinion, the main drawback of perovskite cells is that their efficiency deteriorates quite rapidly when exposed to sunlight.

Today, silicon solar cells have a 25-year lifetime, while perovskite cells serve less than a year. This is the main obstacle to using this technology for massive electricity generation.

We are trying to increase the operating stability of these devices to benefit from the higher efficiency and ensure a longer lifespan. For that, we need to understand the physical and chemical mechanisms of the degradation.

Sputnik: Is there any other technology besides silicon and perovskite that can be used in solar cells?

Eugene Katz: There are many solutions on a laboratory scale that rely on various semiconductors, both inorganic and organic, as well as various device architectures. Many solutions used to coexist and were manufactured concurrently for a long time, but today silicon solar cells strongly dominate in the industrial electric power sector.

Sputnik: How will the average person benefit from this tandem solar technology? Will it become cheaper or more environmentally friendly?

Eugene Katz: Electric power will become cheaper. Things are less clear when it comes to environmental issues. Perovskite structure includes lead, which is not exactly the most environmentally friendly element in the periodic table. For this reason, there are ongoing research attempts to replace lead with something else. However, we may say that even today, thin-film perovskite technology uses less lead than silicon cells, where lead is needed to solder elements together. In my opinion, the stability of the elements is also a major factor here.

© AP Photo / Peter Dejong
Bicyclists are forced to use the sidewalk as they pass a stretch of bicycle path where a solar panel roadway is being constructed in Krommenie, north of Amsterdam, Netherlands, Tuesday, Nov. 11, 2014

Sputnik: Research on perovskites and related applications is being carried out in many countries. Can Russia compete in this race on equal terms? What is the role of NUST MISIS?

Eugene Katz: There was a time when two countries, the US and the USSR, were the leaders in photovoltaics. They needed this technology to power their spacecraft. In 1958, just one year after the Soviet Union launched its first satellite, and four years after the US researchers demonstrated the first silicon solar cell, both the USSR and the US launched solar-powered satellites, the “Sputnik 3” and the “Vanguard 1”. The USSR built an entire photovoltaic industry within a very short period of time under the leadership in R&D by Professor Arkady Landsman. I think we should highlight his role today. Of course, Nobel Prize winner Zhores Alfyorov also played a role, since it was in his laboratory that gallium arsenide-based heterojunctions and multi-junction solar cells were developed.

In the post-Perestroika era, Russia’s academic and applied research, as well as knowledge-based manufacturing, went through a serious crisis that may not be over yet. Young researchers were unable to support their families and had to find other ways to earn money, or left the country.

Now that the world of science has evolved into an international community, research is international by definition. There are no barriers restraining the flow of ideas or even people from one country to another. Any attempt to hinder these flows could have a devastating effect on research.

However, creating conditions to make researchers eager to return to Russia is possible and very important. I see positive shifts in this direction. This is primarily attributable to the system of mega grants as a way to attract the most prominent researchers from abroad and create advanced research laboratories in Russia.

For example, NUST MISIS invited Professor Aldo Di Carlo, one of the world’s leading perovskite researchers, to work here. His task is to create a lab here on perovskite solar cell research and manufacturing within three years. I am especially happy about that since I graduated from MISIS in 1982 and it is there that I started my first photovoltaic research project, supervised by Professor Semen Gorelik.

Skoltech is another major beneficiary of mega grants. By the way, Skoltech is where my long-time colleague, co-author and an incontestable leader in Russia’s perovskite research, Professor Pavel Troshin, works with his team.

I think Russia has the most potential in terms of brainpower and intellectual capability, especially students and young researchers. The goal is to preserve this potential. Otherwise, there will be no success in creating laboratories, let alone developing new technology.

Sputnik: To what extent are perovskites suitable for various applications? Can the same perovskites be used for lighting, lasers and monitors?

Eugene Katz: The term “perovskite” was coined after a mineral, CaTiO3. Today, we use this term to designate a wide variety of materials with the same type of crystal structure. This means that they can serve a variety of purposes and be used in many areas. It’s like asking where metals can be used. But even metal halide perovskites used in photovoltaics serve as a basis to make other devices, like light-emitting diodes, lasers and various sensors.

Sputnik: There is a belief in many countries where there is not enough sunlight that solar batteries would be ineffective. Can perovskite technology change this?

Eugene Katz: For northern countries, any technology that requires direct sunlight would be ineffective since light is absorbed and diffused by clouds, and it loses the intensity. But diffused light can also be used. Solar panels will generate more electricity where there is a lot of light, but they work even in places where light is scarce.

Solar panels have become so cheap today that any country can benefit from them. If the perovskite concept works and efficiency is increased, it will make solar power even more profitable.

This interview was recorded on the side-lines of the 20th International Conference on Physics of Light-Matter Coupling in Nanostructures (PLMCN20) at NUST MISIS.