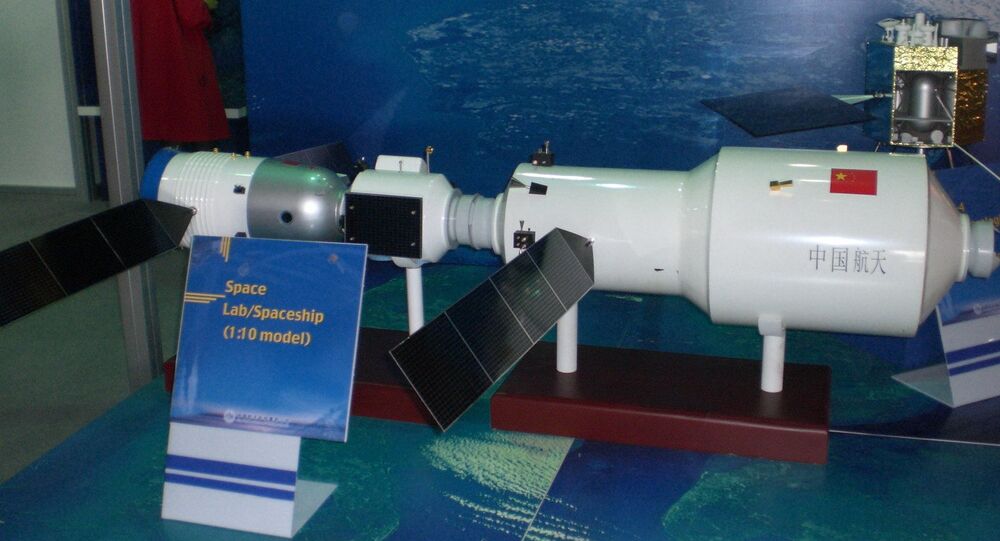 "With the successful controlled deorbit, the Tiangong-2 mission has been completed perfectly. It demonstrates that China sticks firmly to its international duties and keeps its promise of peaceful and scientific use of space resources," Zhu Congpeng, chief designer of Tiangong-2 from the China Academy of Space Technology (CAST), told Xinhua Friday.

The spacecraft’s rear exterior camera captured the early stages of the fireball:

​"Although Tiangong-2 had been in operation nearly one year longer than its designed lifespan, its platform and payloads functioned stably and soundly, and the propellant it carried was still sufficient to support its flight in orbit for another several years," Zhu said, "It's hard to say goodbye to Tiangong-2, but considering reliability- and safety-related factors, we have to drive it out of orbit now."

"To let Tiangong-2 'retire' by choice is to ensure the absolute safety of its departure," Zhu said.

The spacecraft was 10.4 meters long and 3.35 meters wide, Xinhua noted, and was launched in 2016. It was modeled after its predecessor, the Tiangong-1, which plummeted to Earth in April 2018 under less deliberate circumstances.

The China National Space Administration (CNSA) has previously deorbited spacecraft under control. Tianzhou-1, China's first cargo spacecraft, fell to Earth in a fireball in September 2017. However, Tiangong-2’s decent was a little more dignified, being slowly lowered into a disintegrating orbit in steps, whereas Tianzhou-1 was simply set on a crash course for the planet, Xinhua noted.

Check it. Chinese space station Tiangong-2 is about to burn up over the Pacific https://t.co/MYar90l3WH via @techcrunch #tech #digital #data #business pic.twitter.com/amje9MhuRP

​Chinese taikonauts used their month-long stays in Tiangong-2 to carry out experiments in the zero-gravity environment, as well as to refuel other spacecraft. Xinhua noted that only Russia (as the Soviet Union) and the United States have also mastered the art of orbital refueling.

"The Tiangong-2 mission was our first opportunity to carry out a long-term plant experiment in space. This experiment is significant because growing grains and vegetables will be a necessity if humans want to leave the Earth and have long-term survival and travel in space," Zheng Huiqiong, a researcher at the Institute of Plant Physiology and Ecology of the Chinese Academy of Sciences (CAS), told Xinhua.

"We found that plants grow slower in space than on Earth and blossom later. However, they live longer in space than on Earth … If we find the method to regulate the growth of plants, we could postpone the blooming of vegetables to make them grow more leaves and accelerate the blooming of rice to make them seed as soon as possible,” Zheng said. “Therefore, we can use the limited resources in space to maximize crop yields. The research can also find its application back on Earth.”

At 10 tons, Tiangong-2 might have been a tiny capsule of a space station, but Beijing plans to launch a much larger orbital station in the next few years.

The Tianhe-1 (“Harmony of the Heavens”), due to begin being launched in stages in 2020, will eventually become roughly the size of the Soviet Union’s Mir space station, or one-fifth the size of the International Space Station. Tianhe-1 is expected to reach approximately 80-100 tons in mass and have a roughly 10-year lifespan.