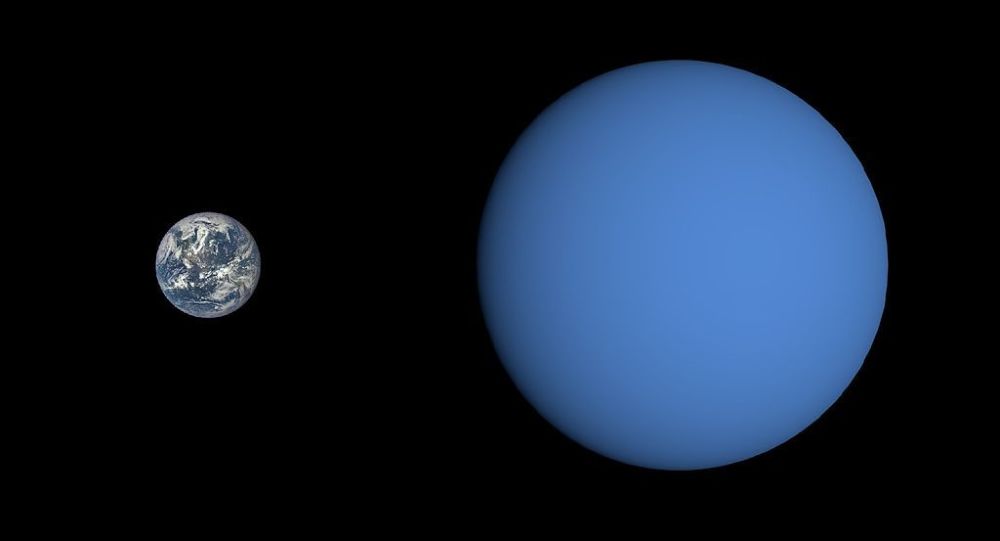 NASA has discovered an unexpected fact about a giant exoplanet, which is between Earth and Neptune in terms of size, but at the same time is unlike anything found in the solar system.

Thanks to two NASA space telescopes, Hubble and Spitzer, astronomers have managed to identify and reveal the first detailed chemical "fingerprint" of a sub-Neptune/Super-Earth hybrid exoplanet.

Scientists believe that there isn't "anything like this in the solar system": the planet, known as Gliese 3470 b, or GJ 3479 b, is 12.6 times heavier than Earth, but is still smaller than the blue ice giant Neptune.

While other exoplanets, called "hot Jupiters", are believed to form far from their stars and over time migrate much closer, Gliese 3470 b, the sub-Neptune/Super-Earth, is thought to have formed where it is today.

The most plausible explanation, according to Björn Benneke of the University of Montreal, Canada, is that Gliese 3470 b emerged dangerously close to its red dwarf star, which has roughly half the mass of the Sun and is located in the general direction of the constellation Cancer.

The scientist assumed that the planet was as a dry rock at first that quickly accumulated hydrogen from a primordial disk of gas when its star was very young.

"This is a big discovery from the planet formation perpective. The planet orbits very close to the star and is far less massive than Jupiter (318 times Earth's mass) but has managed to accrete a primordial hydrogen/helium atmosphere that is largely 'unpolluted' by heavier elements", Benneke, said in a study which was published by NASA's Jet Propulsion Laboratory on 2 July.

The atmosphere of the exoplanet turned out to be quite rich and mostly clear, which made it possible for the scientists to probe deep into the atmosphere using a method called spectroscopy and make an unexpected discovery:

"We don't have anything like this in the solar system, and that's what makes it striking. We expected an atmosphere strongly enriched in heavier elements like oxygen and carbon which are forming abundant water vapor and methane gas, similar to what we see on Neptune. Instead, we found an atmosphere that is so poor in heavy elements that its composition resembles the hydrogen and helium-rich composition of the Sun."