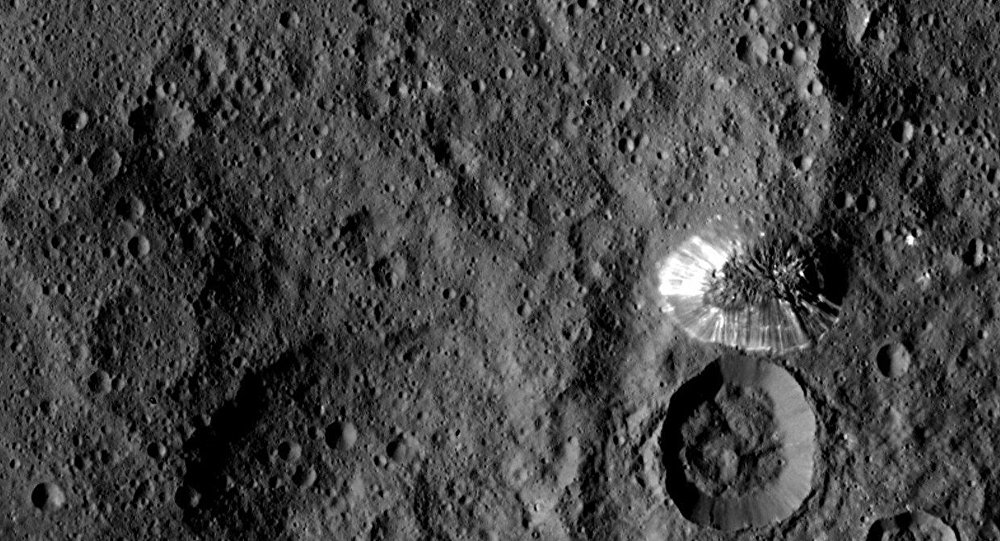 NASA launched its Dawn spacecraft in 2015 to travel to the icy dwarf planet Ceres, making the local celestial body the first of its kind to be visited.

NASA have revealed surface pictures of an extraordinary mountain on the surface of the dwarf planet Ceres. The space agency said it "is like nothing that humanity has ever seen before".

Ceres is both a dwarf planet and the largest known asteroid on our Solar System, with a diameter of almost 600 miles. It is also home to Ahuna Mons, “the largest mountain on the largest asteroid in the solar system,” according to NASA.

The space agency used the Dawn spacecraft to record images of the mysterious formation.

Ahuna Mons is the largest mountain on the largest known asteroid in our Solar System, #Ceres, which orbits our Sun in the main asteroid belt between Mars andJupiter.

​The mountain reportedly reaches a height of over 13,000 feet, just under half of the height of Earth’s largest mountain, Mount Everest, at 29,029 feet. The massive anomaly is adorned with strange slopes with interesting vertical streaks.

It is currently unknown what caused its formation, but NASA offered a theory in a statement: "Based on numerous gravity measurements, a bubble of mud rose from deep within the dwarf planet and pushed through the icy surface at a weak point rich in reflective salt — and then froze."

The portion of the dwarf planet where Ahuna Mons is located “is not solid and rigid, but moving and at least partially fluid," said Wladimir Neumann of the DLR Institute of Planetary Research in Berlin-Adlershof and the University of Münster, in a news release on the DLR official website.

“In this region, "This ‘bubble’ that formed in the mantle of Ceres beneath Ahuna Mons is a mixture of saline water and rock components." Neumann said.

Using information gleaned by the Dawn spacecraft, a report published in 2018 proposed that the planet's organic material may have more of an abundance of carbon-based compounds necessary for life than previously believed.

Photographs of obscure bright spots can be seen on the surface with streaks matching those found on the side of the mountain.

For 3.5 years, our @NASADawn spacecraft explored mysterious Ceres, a dwarf planet between Mars and Jupiter.

Now, scientists create experiments with Dawn's data to study Ceres — including its famous bright spots. How to DIY planetary materials in the lab: https://t.co/9fKD9zD5zN pic.twitter.com/27dstRNRxE

Detailed images of the dwarf planet were rendered from surface maps taken from Dawn, which is now locked in orbit around Ceres. The spacecraft was retired after running out of fuel.

Since its discovery, scientists have pondered the possibility that Ceres could support life.

In 2017, Dawn identified organic molecules which appeared to form the dwarf planet itself that were not from an asteroid or comet, which could act as a basis for life.

While the existence of organic molecules does not guarantee life, their discovery draws us close to an answer as to whether Ceres is potentially habitable.

First identified by Giuseppe Piazzi in 1801, Ceres sits in the asteroid belt between Mars and Jupiter, and is the largest object in the cluster.

Ahuna Mons was one of a myriad of peculiar details captured by Dawn of the dwarf planet.