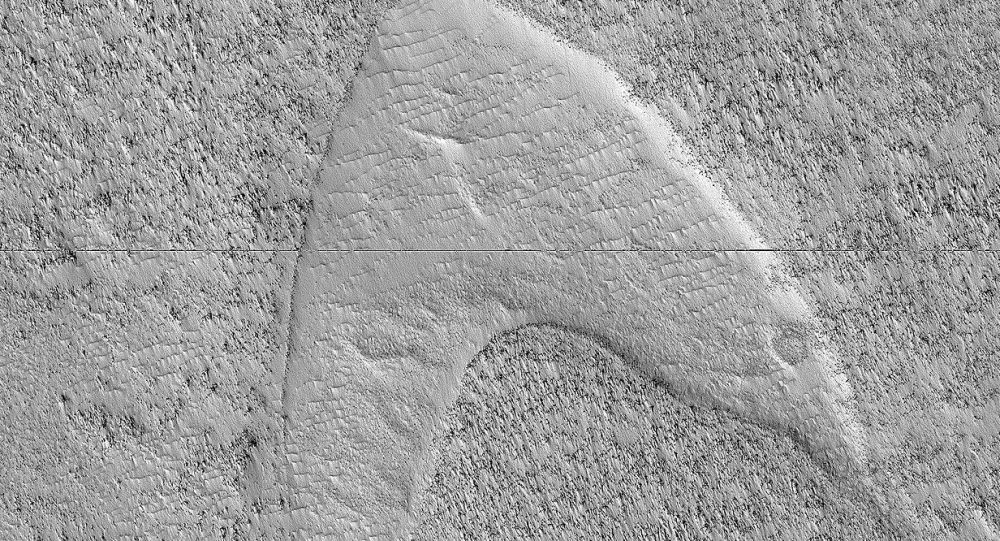 Following the newest finding, a question arises as to what actually came first – humans on the Red Planet, which has been the object of extensive research in terms of whether its conditions were ever compatible with life, or a popular American media franchise that is suspected to have literally left its mark there.

However big Earthlings’ plans to send a manned mission to Mars are, it seems that the Starfleet might have been the first to reach the much-coveted destination, a notion which follows from the Mars Reconnaissance Orbiter’s snapshot of a giant formation shaped strikingly like the organisation’s famed chevron.

"Enterprising viewers will make the discovery that these features look conspicuously like a famous logo", researcher Ross Beyer of the University of Arizona said in a statement that accompanied the photo release, adding, however, that it’s a shame the snapshot is no evidence of “intrepid explorers” embarking on the bold mission.

Per Beyer, the observed logo spotted in Hellas Planitia, a vast plain area within the Hellas impact basin in the southern hemisphere of Mars, is nothing more than a “coincidence”.

According to the afore cited statement, it is a combination of three weather and geological factors – dunes, lava, and wind -  that formed the chevron shape visible in the picture, while there have been hordes of other similar shapes photographed on Mars earlier. Scientists, who have been working on the subject with the help of the so-called HiRISE instrument, have come to believe that the formation of the structure began with crescent-shaped sand dunes, where wind interacted with the surface.

The wheels are on our new Mars rover. Congrats to our assembly team on the incredible progress on getting the Mars 2020 mission ready. Go Mars 2020! pic.twitter.com/zpm9eo3SOI

Then, lava, albeit not very thick, was spewed out, with the molten substance spilled all across the area around the dunes. By the time it eventually cooled, the pattern was already there, with the sand dunes remaining “stuck up like islands”, the statement said.

However, given the fact that winds continued to blow, the sand piles moved slightly, leaving these “ghost dunes”, or expressed otherwise “dune casts” , in the lava plain. The latter formations have recently been explored, with the Hellas Planitia found to house nearly 300 of them, while another 480 have been mapped in a region called the Noctis Labyrinthus – an area well-known for its elaborate maze of valleys.

The MRO, which has been sending high-resolution snaps for 13 years now, functions as a vital communications relay for NASA’s Curiosity rover and the InSight lander, which is also expected to partake in the widely anticipated Mars 2020 rover mission.

This is the best thing on the internet!