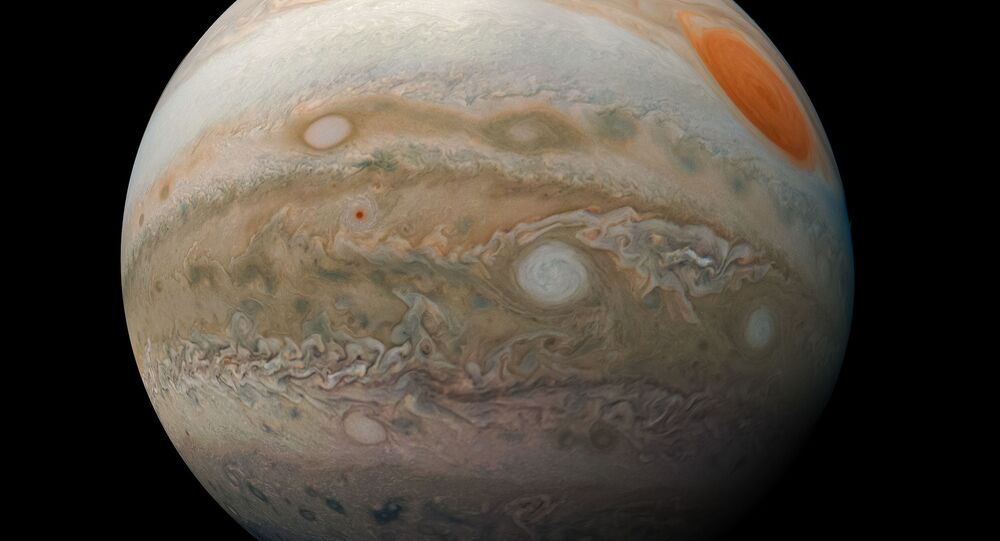 Named for the Roman goddess Juno and the wife of Jupiter, who was able to reveal the god's true nature, the Lockheed Martin-built Juno probe has been beaming back photos of the planet's surface. Since arriving in 2016, it has already completed over half of its quest to investigate the atmosphere of the solar system’s largest planet.

The US space agency NASA’s Juno spacecraft has taken a breathtaking picture of a strange black vortex on Jupiter.

© AP Photo / ESA/Hubble
NASA's Juno Spacecraft Looks Into the Depths of Jupiter's Great Red Spot
The peculiar phenomena was captured during Juno’s 20th flyby of Jupiter on Wednesday, May 29, while the craft was roughly 9,300 miles (approx. 14,966 kilometres) from the planet.

The eerie dark hole seen swirling at the centre of a Jovian Jet Stream has perplexed even NASA’s top scientists.

The agency has said they could not explain the mysterious dark vortex and likened its appearance to “cream in coffee” on Instagram.

At first glance, these swirling clouds might look like cream in coffee. ☕ In fact, during a flyby of Jupiter, our @NASAJuno spacecraft captured this view of an area within a Jovian jet stream showing a vortex that has an intensely dark center. At the time, Juno was about 9,200 miles from the planet's cloud tops. Nearby, other features display bright, high altitude clouds that have puffed up into the sunlight. Image Credit: NASA/JPL-Caltech/SwRI/MSSS/Gerald Eichstädt/Seán Doran #NASA #Jupiter #SolarSystem #Storms #CoffeeInTheMorning

During Juno’s latest journey around Jupiter, NASA scientists Gerald Eichstadt and Sean Doran extracted a digitally-enhanced image from the spacecraft and dubbed it ‘Jupiter’s Abyss’.

“What’s that black spot on Jupiter? No one is sure.” the space agency wrote.

“Since dark features on Jupiter’s atmosphere tend to run deeper than light features, the Abyss may really be the deep hole that it appears”.

The Abyss is encircled by a “complex of meandering clouds and other swirling storm systems, some of which are topped by light coloured, high-altitude clouds.”

Juno completed a five-year voyage to the planet and has been orbiting Jupiter since 2016.

Circling at 9,300 miles (14,800 kilometres) from the surface, no previous spacecraft has been so close to Jupiter in orbit. Although NASA previously sent two probes into Jupiter's crushing atmosphere before being destroyed.

NASA researchers discovered a changing magnetic field on Jupiter. Making it the first time in history such a phenomena has been detected on a planet aside from Earth.

This discovery could potentially help us understand how planetary magnetic fields fluctuate.

NASA has offered an opportunity for stargazers to take part in Juno's mission. Issuing the statement: “Using NASA's eyes on the solar system and simulated data from the Juno flight team you can ride onboard the Juno spacecraft in real-time at any moment during the entire mission.”