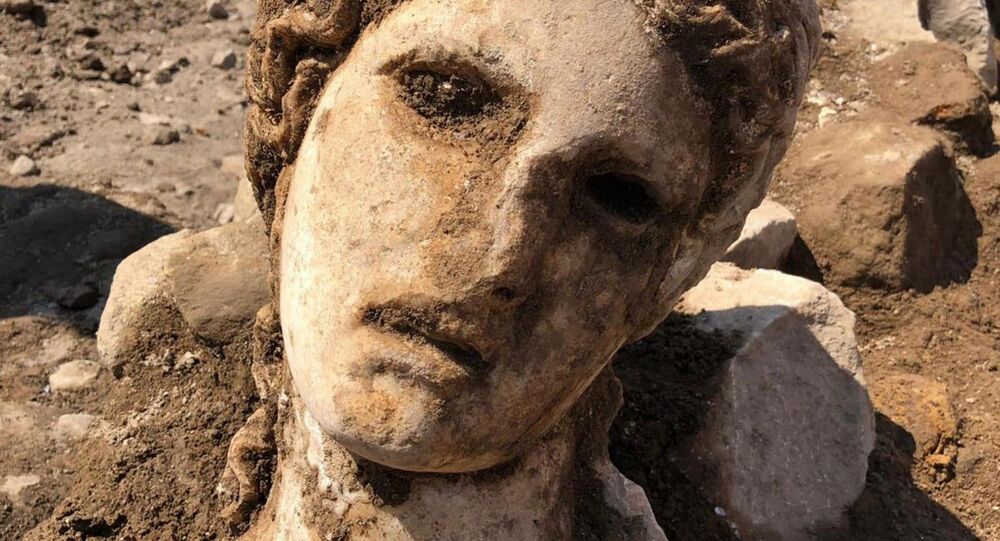 Rome continues to bear priceless ancient gifts as archeologists recently made a remarkable find during excavations in the heart of the Italian capital, near the remains of the ancient Roman Forum.

Rome’s archeologists literally stumbled upon a fascinating discovery during excavations in the heart of the city, near the remains of the ancient Roman Forum.

The marble head they dug up would have belonged to a large statue of the god Dionysus, also known as Bacchus, the ancient Roman god of wine, dance and fertility, dating back to the imperial era.

“The archaeologists were excavating a late medieval wall when they saw, hidden in the earth, a white marble head,” said a statement from the Archaeological Park of the Colosseum, which encompasses the Roman Forum.

Interestingly enough, the ancient marble head had been incorporated into the wall as building material, in a medieval stab at recycling.
As the archaeologists brought forth the artefact it shone forth in all of its beauty.

“The face is refined and gracious, young and feminine. All of which makes us think this could be a depiction of Dionysos,” said the archaeologists.

“The hollow eyes, which were probably filled with glass or precious stones, date it to the first centuries of the Roman Empire,” he said.

“The surface is not completely visible because we haven't yet given it a thorough clean. We think that there could still be traces of the original colour conserved in the band around the hair."

According to Claudio Parisi Presicce, director of Rome's archaeological museums, the head dates to between the 1st century BC and the 2nd century AD.

Dionysus was the son of Zeus and Semele, the mortal daughter of the king of Thebes.

To the ancient Greeks, he was the god of wine, wine-making and grape cultivation, as well as of fertility, theatre and religious ecstasy.

Dionysus was worshipped as one of the 12 Olympians before being incorporated into the Roman pantheon of gods as Bacchus.

“Rome continues to surprise us every day,” enthused Rome’s mayor Virginia Raggi. “The head of the statue… is in excellent condition. It’s a marvel.”

The sensational archaeological discovery will be spruced up and eventually put on display.