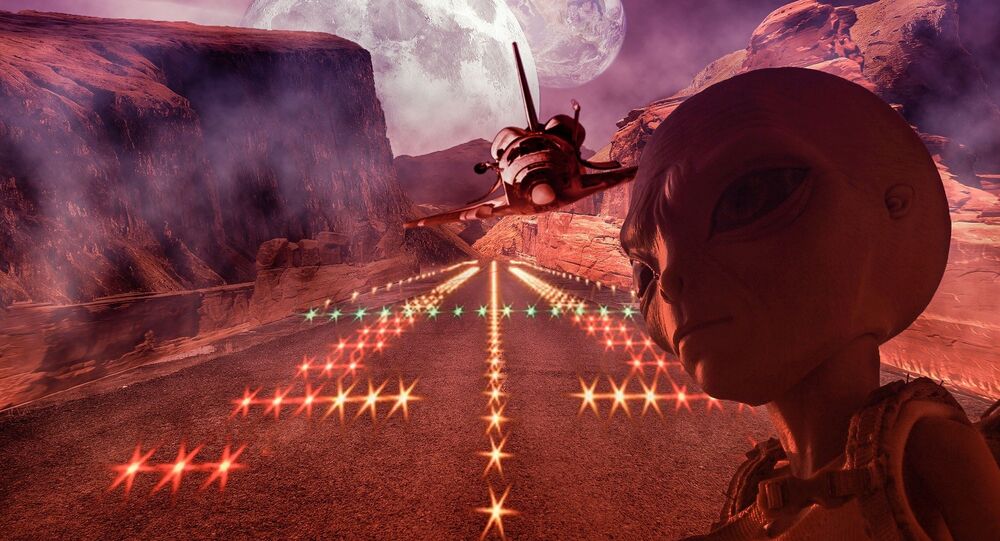 The gas-shrouded Red Planet has long been associated with undercover state programmes, with multiple experiments reportedly being carried out outside Earth’s atmosphere for security reasons, but the latest one of a kind sighting has nothing to do with any technological or military drills, observers claim.

A UFO has been mapped on the surface of the Red Planet, assumes alien conspiracy theorist Scott Waring. The theorist is referring to an oddly coloured anomaly that has been detected by Google Mars.

“This is a UFO that has crashed into a crater on Mars”, Waring pointed out, depicting the enigmatic blue object as a thick disc spacecraft. It is no less surprising, he said, that no one at Google has even edited it out, going on to express his bewilderment at the “burn and scorch marks” that the object features when the compass is rotated – the “sure signs” of something having “crashed here”.

Waring is meanwhile pinning hopes on an edge to this blue disc finally showing itself one day, enthusiastically suggesting that the unidentified object is a “biologically-grown spaceship” due to its rough edges resembling something organically grown.

The UFO conspiracy theorist argued that aliens could have figured out how to do things quicker than humanity, noting that this is one of the most detailed “living ships” he has ever seen.

Admitting he has seen blue “structures” on the planet Mercury, he noted he had never spotted a blue UFO. He continued to speculate on the extraordinary size of the alleged biological anomaly and how big the scorch marks on its surface are: his photo-editing software led him to conclude that the scorch mark trail measures about 6.25 miles (10 km), while the suspected UFO itself is 1.28 miles across.

However, interpretations about the object’s origins ran wild in the comments, even before Waring voiced any concrete idea, assuming it might be anything from a blue-coloured rock due to a nearby cloud of frozen gas, or, alternatively, a crashed meteorite or an asteroid.

“I could be wrong but to me the blue light area looks like light coming up from a huge hole of an underground base rather than a disc but I’d bet many UFOs go in and out of it. Looks awesome whatever it is”, one astonished viewer commented, while another butted in noting it could be “a traveling object in the Martian atmosphere caught in the satellite picture just at right time.”

“This is so important [sic] photo, mostly a crash site, and probably not so ancient, burn marks can't stand the eternity of time. Good job Scott”, a different user posted, with another one suggesting it might be something “shooting out of the surface of Mars”. He argued that the black scorch marks are possibly “remnants of it.”

Some, however, dismissed the UFO version asserting that it looks more like gas coming out of the planet’s surface, or “a tangent metal explosion from the Blue Energy program” – the project aiming to extract sustainable energy from salty and fresh water bodies.

Meanwhile, praise for the author came in abundance:

“Awesome find Scott, yet again. I wonder how long Google will allow this to be viewed”, one YouTuber stated.

“I believe you found gold man!” another person exclaimed.