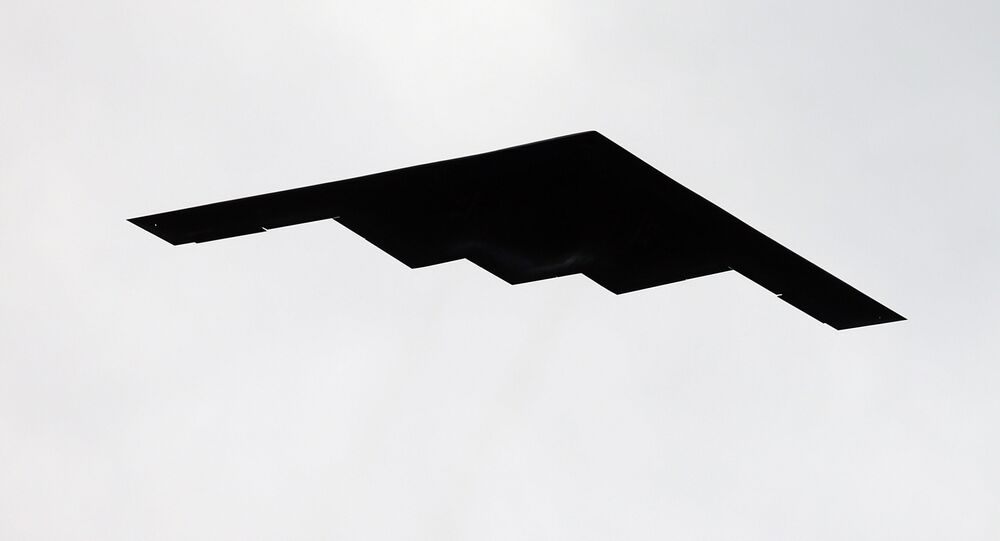 The US premier bomber is famous as the nation's only aircraft which is capable of dropping massive earth-penetrating bombs.

A video has emerged of the Northrop B-2 Spirit, the world's first and only stealth bomber, dropping two dozen tonnes of democracy during a test flight.

The B-2 Spirit, which entered service in 1997, is capable of dropping both conventional and nuclear munitions on any site in the world in a matter of hours.

It made its combat debut during the Kosovo War in 1999 and was later deployed in Iraq, Afghanistan, and Libya.

The stealthy strategic bomber is the only aircraft in the US fleet that can carry the nation's largest non-nuclear bomb, the 30,000-pound (13.6-tonne) precision-guided bunker-buster bomb, known as the Massive Ordnance Penetrator (MOP).

This weapon can break through 60 metres of reinforced concrete before detonation — making it a big menace for some of the most heavily fortified bunkers in the world.

In the clip, the B-2 Spirit can be seen releasing two bombs that blast apart two separate designated ground targets.

The footage emerged on a popular YouTube channel sharing military training videos, but appears to have been initially shared by the public affairs office of the 509th Bomb Wing, the host unit at Whiteman Air Force Base, Missouri which operates the stealth bomber.

Although the US military has shared videos of its most advanced bomber in the past, such occasions are quite rare.

Courtesy of US Pacific Air Forces
First Nuclear-Capable B-52 Bombers Arrive In Middle East From US (PHOTO, VIDEO)

Footage of the plane began to appear on social media more frequently in the past year. A documentary video surfaced in April, offering a peak into the B-2's cockpit and refuelling sessions for the first time ever. The narrator said: ​"In an era of rising tensions between global nuclear powers — the United States, China, Russia, and North Korea — this timely video of is a vivid reminder of the B-2's unique capabilities".

This time, the video comes amid a spike in tensions between the United States and its long-time rival in the Middle East, Iran. Relations between the two countries have been troubled ever since the 1979 Islamic Revolution and the following hostage crisis, but entered a new low last year after a period of rapprochement.

Washington is currently ramping up its military presence in the Middle East after intelligence data allegedly revealed Iran's intention to attack US interests in the region. Tehran, however, shrugged off the allegations as "fake intelligence".

Fears of a military confrontation loom large as US officials are blaming Iran or its proxies on the recent "sabotage operation" against commercial ships off the coast of the United Emirates, while a state-aligned Saudi media outlet called for "surgical" US strikes on Iran, which Riyadh is blaming for a drone attack on a major oil pipeline.