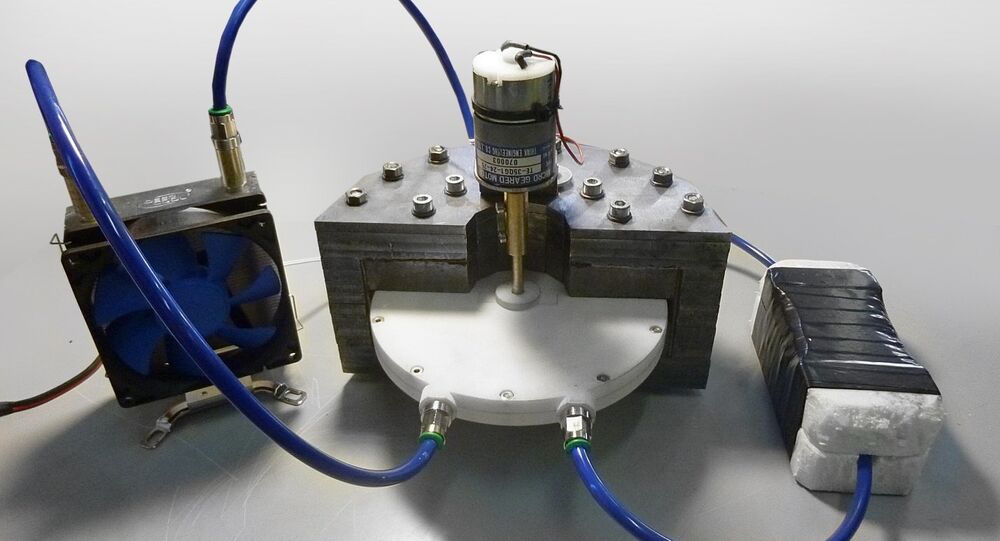 Russian engineers have designed a next-generation refrigerator cooled by magnetic metal instead of evaporating liquid, which improves energy efficiency by 30 to 40 percent, the NUST MISIS press service told RIA Novosti.

"Researchers from the National University of Science and Technology MISIS and Tver State University have developed a new type of refrigerator based on a solid-state magnetic system that improves energy efficiency by 30 to 40 percent compared to gas compressors used in conventional refrigerators," the university said in a statement. The new design is based on the magnetocaloric effect in which a magnetic field changes the temperature of magnetic material.

Senior research fellow at NUST MISIS, Dmitry Karpenkov, told RIA Novosti that the developers view as the main achievement the cascade effect in which gadolinium metal bars are placed on a special wheel that puts them in a magnetic field by spinning at a high speed.

© Photo : CNIITM//Instagram
Russian Engineers Show Possible Replacement for Legendary Makarov Pistol (VIDEO)
According to Karpenkov, this is a relatively young technology that is only about 20 years old. Still, Russian researchers were the first to implement the cascade principle. Existing devices are not designed to lower temperatures dramatically and can only maintain a certain temperature.

The researcher also discussed plans for the future. The developers intend to continue working on the cascade principle in order to expand the temperature range that can be achieved by this refrigerator. So far its temperatures vary by 10 degrees, but this range could be expanded to 12 to 15 degrees.

Karpenkov noted that the test unit's dimensions do not exceed 15 cm. It is believed that the main applications of this compact device will come in car air conditioners and microprocessor cooling systems.