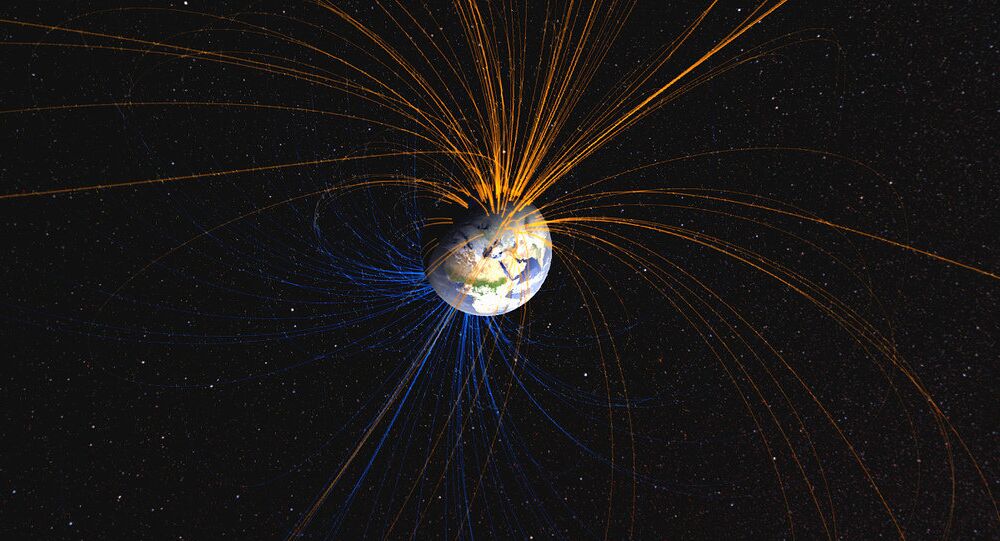 Earlier this year, scientists had to update the World Magnetic Model representing our planet's magnetic field a year ahead of schedule after discovering that the Magnetic North Pole was moving from the Canadian Arctic toward Russia's Siberia at an accelerated pace.

Earth's magnetic field, the "colossal force field" which makes life possible and shields us from deadly solar radiation, is decaying at a rate of 5 percent per decade, rather than the previously-assumed 5 percent per century, journalist and blogger Michael Snyder has written, citing multiple scientific sources.

According to data from the European Space Agency's SWARM satellite constellation – a four-year scientific project designed to make precision measurements for determining the state of Earth's magnetic field, the geocentric axial dipole component of the magnetic field is weakening much faster than the previous 5 percent per century estimate.

© NASA
Super-Magnetic Neutron: Birth of MYSTERIOUS Object Sends Incredible Space Signal
Specifically, science commentator and award-winning science fiction author C Stuart Hardwick explained the strength of Earth's main magnetic field, which stands at about 29.5 microteslas (the unit measuring a magnetic field) has dropped by 5 microteslas, or some 14 percent, from a strength of nearly 35 microteslas in the year 1700.

At the same time, Hardwick noted, precision measurements by the SWARM satellites have shown the magnetic field to have weakened by some 3.5 percent in high latitudes over North America while strengthening by 2 percent over Asia during two and a half years of observation.

Downplaying public fears, the commentator suggested that a collapse of the magnetic field, set to occur within the next two thousand years,  has already "happened hundreds of times before," with "no evidence that it has caused a mass extinction or even a noticeable disruption to life on Earth."

Snyder, however, is not so certain, warning that "if the rate of decay continues" at its present pace, "or speeds up even more, we could be looking at a mass extinction event that is beyond what most people would dare to imagine."

© Photo : Pixabay//Gerd Altmann : Particles Head Brain
Scientists REVEAL All Humans Able to Sense Magnetic Fields
According to the journalist, the weakening magnetic field could mean rising cancer rates, billions or even trillions of dollars in damage to man-made spacecraft and power grids, and, if worst comes to worst, bombardment by cosmic rays which could damage our DNA as sharp solar winds threaten to "strip away our planet's atmosphere and oceans".

Ultimately, Snyder warns, "our planet is becoming increasingly unstable, and we are seeing things happen that we have never seen before. Everyone agrees that the Earth's magnetic field is rapidly getting weaker, and that is making us more vulnerable with each passing day. Most of the experts are trying to put a happy face on things and are assuring us that everything is going to be okay. Hopefully they are right, but I wouldn't count on it."