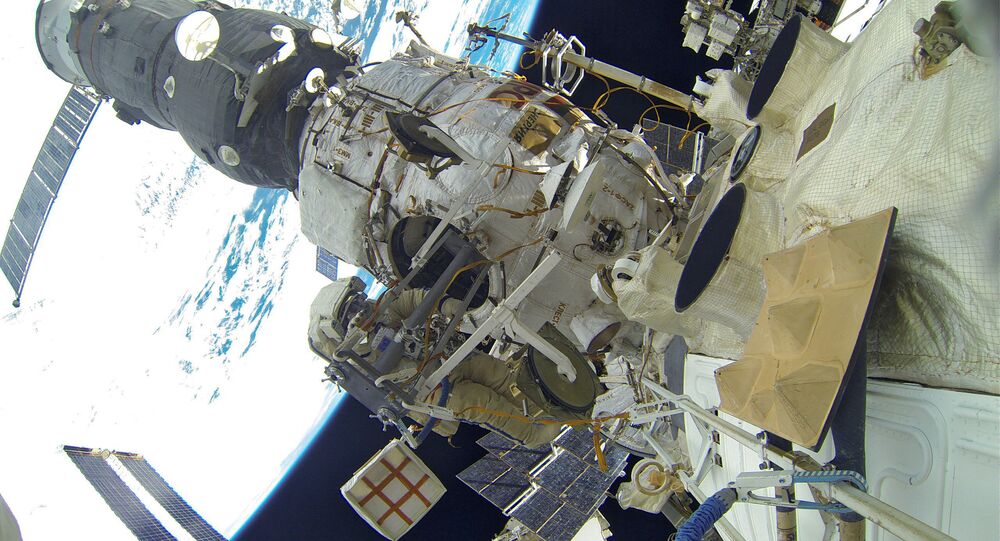 Russia's Science-Power and Prichal Nodal modules are expected to be delivered and attached to the International Space Station in 2021 and 2022, respectively, and to later help to form the first building blocks of the country's new space station.

The new scientific and energy modules set to be attached to the Russian segment of the ISS will receive domestically-engineered body armour fabric-based anti-meteorite protection, according to Space Engineering & Technology, the official journal of Russia's Energia rocket and space corporation.

"The basalt and body armour fabrics from which the structure of the buffer shield is based are comparable in terms of their properties to the Nextel and Kevlar fabrics used in the shielding on NASA modules," the article, written by the material's developers, noted.

© AP Photo / Roscosmos Space Agency Press Service
Progress MS-11 Spacecraft Launched to Reach ISS in Record Time (VIDEO)
The journal pointed out that NASA engineers actively participated in creating shielding for the Zarya, the first module of the ISS, with much of the Russian-designed module built using US money in the late 1990s. Similar protection was provided for the Nauka Multipurpose Laboratory Module, a long-planned ISS research, docking and cargo module being developed by Roscosmos which is expected to go online in mid-2020.

Russia is expected to build the Orbital Piloted Assembly and Experiment Complex (Russian acronym OPSEK), a low Earth orbit space station sometime in the 2020s. The station will use Russian-made components from the ISS which are expected to be removed when the international station ends its operations in the mid-2020s. In addition to carrying out the functions of a traditional space station, the OPSEK is envisioned as a staging area for the assembly of components for manned spacecraft carrying out missions to the Moon, Mars, and other planets.

© Photo : federalspace.ru
About 50 Pieces of Destroyed Indian Satellite Flying Above ISS - US Air Force
The ISS has long been shielded by multiple layers of Nextel and Kevlar body armour fabric, which blanket the station in order to protect it against meteorites and other forms of space debris.

Last week, India successfully tested a new anti-satellite weapon, destroying a Microsat-R satellite in low-Earth orbit. The test has led to international criticism about the use of weapons in space, and caused concerns regarding the operation of the ISS, with the leftover fragments of the satellite and missile posing a threat, albeit "a highly unlikely one," to the station's operations, according to Russian space experts.