US space agency NASA posted a video Thursday of not one, but two solar eclipses its Curiosity rover on Mars recorded last month. The transits will help scientists understand the unusual orbits of the Red Planet’s two oddly-shaped moons. 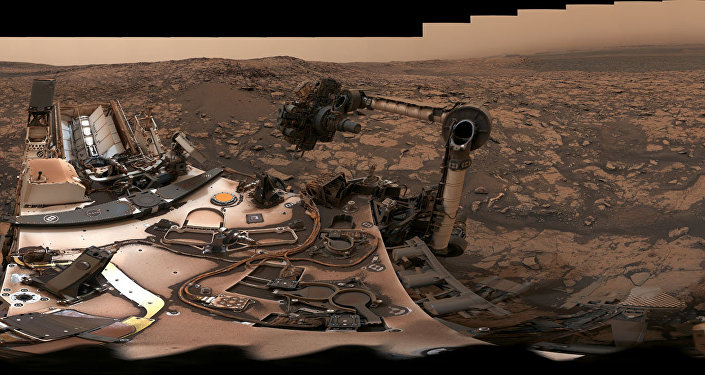 © NASA . NASA/JPL-Caltech/MSSS
Mars Rover Snaps 360-Degree Photo of Red Planet’s Surface (VIDEO)
The planet Mars and its two moons, Phobos and Deimos, are named for the Roman God of War and his two mighty sons, who followed him into battle. While many probes and rovers have enhanced our understanding of the Red Planet over the years, our knowledge of Mars' two small moons remains scanty.

However, after both moons passed in front of the sun (from the vantage point of the Martian surface, of course) last month, scientists garnered some valuable information with which to understand more about Phobos' and Deimos' orbits, and thus possibly also their histories.

This March, our @MarsCuriosity rover saw not one but two solar eclipses, by two different moons! 👀

The views it captured of tiny Deimos and larger Phobos (seen here) will be used to better understand the moons' orbits. Click through for more: https://t.co/7abPqsxQTC pic.twitter.com/8SI6cE5FQi

​Phobos is only 7 miles across and Deimos a mere 1.5 miles wide; truly paltry compared to Earth's moon, which is about 1,079 miles across. However, Mars' moons orbit much closer to it than Earth's moon, so Phobos still appears about one-third the size of our moon in the sky.

However, since neither moon is big enough to totally block out the sun, these were actually annular eclipses, or what astronomers called "transits," since the rock can be seen transiting from one side of the solar disk to the other.

Until recently, the prevailing logic about the origins of Deimos and Phobos was that they were captured asteroids, since Mars sits near the solar system's Asteroid Belt and the moons are irregularly shaped. However, other features, such as the moons' densities and their nearly circular orbits, suggest another origin. A study published in Science Advances last April by scientists at the Southwest Research Institute (SwRI) in Boulder, Colorado, used a new collision model to show that a large impact could have ejected enough material from Mars to form the two moons — also a theory explaining how Earth's moon was formed.

This wasn't the first time a Martian eclipse has been witnessed by a rover, though — in fact it's the eighth. Earlier NASA probes, like Spirit and Opportunity, which also collected information on the moons' orbits in the 2000s, have helped accumulate data, making this the most accurate measurement yet, Mark Lemmon of Texas A&M University, College Station, who works on the team dealing with Curiosity's specialized cameras, said in a NASA press release Thursday.

© NASA . NASA/JPL-Caltech
Stuck Between a Rock and a Mars Place: NASA's InSight Lander Snagged on Object

"More observations over time help pin down the details of each orbit," Lemmon said. "Those orbits change all the time in response to the gravitational pull of Mars, Jupiter or even each Martian moon pulling on the other."

Plus, it makes the Red Planet feel more like our own world, he said. "Eclipses, sunrises and sunsets and weather phenomena all make Mars real to people, as a world both like and unlike what they see outside, not just a subject in a book."

The car-sized Curiosity rover has been exploring Mars' equatorial Aeolus Palus plain since 2012, looking for signs of life or conditions making life possible, either in the present or past.