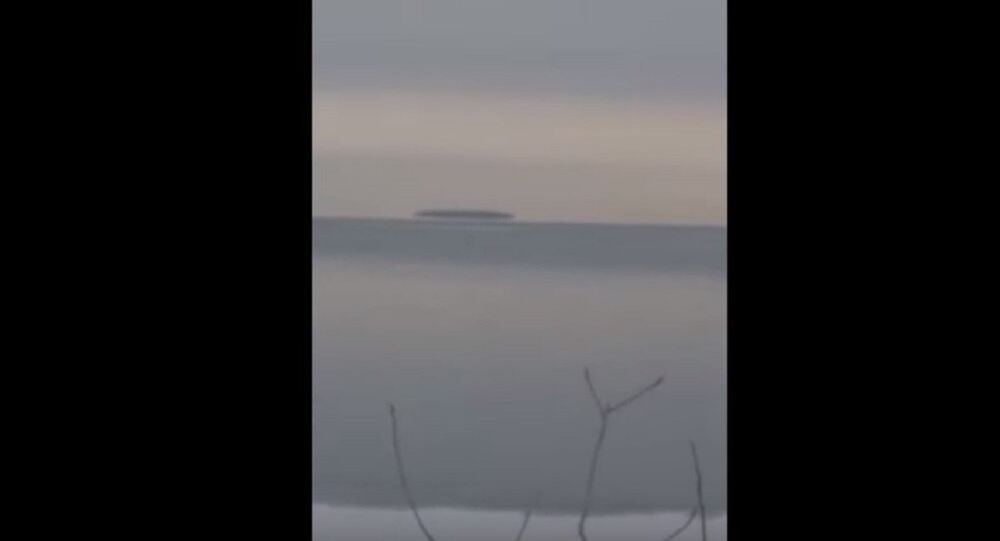 The freshly uploaded video has already racked up thousands of views, prompting netizens to come up with their most wild guesses over what is actually in it – from a UFO hovering above the water to a US Navy submerged object phenomenon.

Footage, reportedly from around last Christmas, has emerged online showing an enigmatic blackish object hovering just above the vast Lake Erie, which stretches well beyond the Canadian province of Ontario’s borders, into three US states.

Casting a reflection on the water’s mirror-like surface, the object, which has an elongated shape, seems to be flying a short distance above the lake, with the sight causing some to speculate that it could be a US Navy submarine popping up on the horizon, or even a UFO.

“It’s a UFO. End of story”, Macs Headroom commented below the video, published on conspiracy website The Third Phase of the Moon.

“Some people are speculating that this could be a US Navy submarine surfacing, but it doesn’t look like that and seems like it’s hovering above the surface of the lake”, one commenter said in the voiceover, going on to assume that there might be a kind of underwater base in the lake’s depths. “This is clear evidence of a USO (Unidentified Submerged Object) in action”, the other replied.

Lou V44 suggested that the object is, surprisingly, indeed “off the water”.

Yet, there was also room for jokes, with one suggesting it is “his mother-in-law coming”.

Other hypotheses sound more classic, though:

“Maybe it's a ghost ship… A lot of ships got lost in lake Erie”, another said, picking up on the mystery around the undetermined object, with some users ruling out the version of a submarine surfacing, citing the lake’s shallow waters.

“Impossible for it to be submarine since its already floating!” Carlito Hilvano remarked, whereas another netizen sticks to another point of view:

"Maybe a hole in the ice? Dead huge ancient whale laying on the ice? Or is it really cloud background beneath the object and it's actually hovering? Probably a hovering submarine!" the netizen concluded.

“Great video. That craft coming out of Lake Superior! Mind blowing, there’s got to be a base down there. 320 million years old? We’ve been here time & time again I think, sometimes we’re lucky enough to catch an item that’s from one of our previous existences”, yet another conspiracy theorist weighed in, with others suggesting virtually everything else – from a giant mushroom from “Supermario” to a signal that “a war is coming”.

Many emotionally expressed their delight at the video, dwelling on the artefacts captured in it:

“Love the eerie lake ufo!! Solid. Reminds me of those one leaked photos from the navy of UFOs over the water. Also love the screw at the end [of the video]. This era is not the first time humanity has experienced advanced technology, there have been many other archaeological artefacts like this one that have raised the same questions”, one of the commenters noted,  heaping praise on the video.

Is the College Scam Scandal a Shiny Distraction Object for the Media?