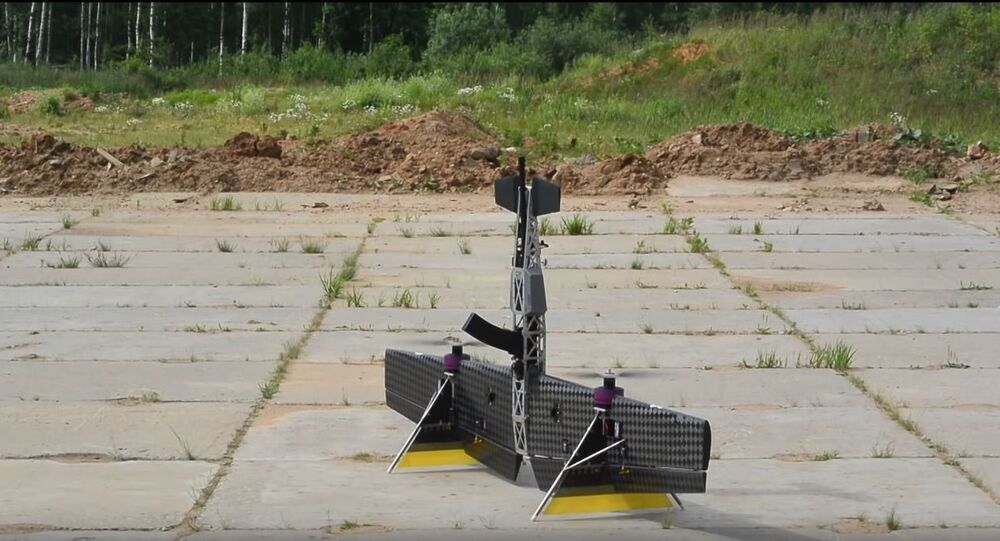 Russia's Moscow Aviation Institute has presented an unnamed drone that can shoot 12-gauge ammunition to take down rogue drones. There are a number of technical features that make it stand out among its robotic counterparts.

According to a video uploaded to YouTube, the drone starts at an uncommon vertical upwards-looking position. Its frame hull is built entirely around a Vepr-12 semi-automatic shotgun. The Vepr — much like its direct competitor to Izhmash's Saiga-12 shotgun — shares a lot of similarities with the famous AK assault rifle, but instead shoots 12-gauge rounds.

Naturally, the shotgun installed on the drone lacks stock and pistol grip, since drones have no shoulders or hands.

"The use of a shotgun instead of a rifle or pistol makes perfect sense," writes Foxtrot Alpha's Kyle Mizokami. "As any duck hunter will tell you, the dispersed pattern of tiny shotgun pellets is more effective at hitting small moving targets than the single bullet from other firearms. Flying drones are particularly fragile, unable to adapt if their aerodynamic profile is altered by even the slightest damage."

In his article title "Russia's Shotgun-Wielding Drone Is the Flying Nightmare You Didn't Know You Had," Mizokami expresses his fascination with the drone's handling of Vepr-12's massive recoil.

The drone is powered by two propellers installed on its rear, larger, wings, which also allow the drone to maneuver. A couple of smaller wings are installed at the front of the vehicle.

© Photo : Russian Defence Ministry press service
Russian Underwater Drone Poseidon Keeps US Intel on the Alert
During the course of the video, the drone is seen destroying an immobile aerial target (a balloon), then switching to a mobile target, represented by an RC airplane.

After successful destruction of the second target, the drone promptly lands in the same upwards-facing position. The vertical landing method is beneficial in that the drone does not need a prepared runway.

According to Mizokami, the drone has been developed by the Student Design Bureau of Aviation Modelling at the Moscow Aviation Institute (MAI) on behalf of Almaz-Antey, Russian tech company, most famous of its anti-aircraft and anti-missile weapons.

"War, as it is, is already horrifying," Mizokami writes. "Whatever bright days you thought lay ahead for humanity, the future is full of things like flying, man-hunting shotguns."

US Navy Wants a 'Ghost Fleet' of Drone Warships – Report