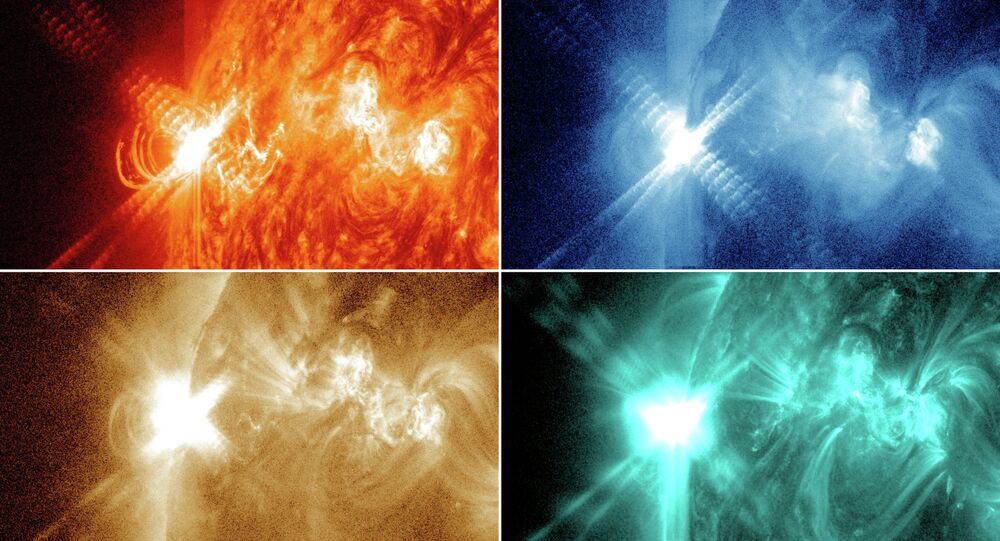 Scientists say their findings are essential to getting a better and more precise understanding of the processes taking place in the Sun's atmosphere, some of which can affect Earth.

Researchers from Aberystwyth University in Wales, Queen's University Belfast, and other universities across Europe have discovered that the Sun's magnetic field is roughly ten times more powerful than previously believed.

The scientists' findings, published in the Astrophysical Journal, were made possible thanks to Dr. David Kuridze and his team's close observation of a particularly powerful solar flare on the Sun's surface over a ten day period in September 2017 using data from Sweden's 1-m Solar Telescope in Roque de Los Muchachos Observers in the Canary Islands.

© Photo : Pixabay
FarFarOut to Planet X? Astronomers Spot Record-Breaking Distant Object in Solar System
Using the telescope's high-resolution imaging spectropolarimetry, and applying a combination of "certain favourable conditions" and a bit of luck by happening to focus on just the right volatile area of the Sun when the solar flare hit,  Dr. Kuridze and his collaborators were able to get a previously unprecedented gauging of the actual power of the flare's magnetic field.

"Everything that happens in the Sun's outer atmosphere is dominated by the magnetic field, but we have very few measurements of its strength and spatial characteristics," Dr. Kuridze explained. "These are critical parameters, the most important for the physics of the solar corona," the scientist added, referring to the aura of plasma which surrounds the Sun and other stars and extends millions of kilometers into outer space.

The focus on the solar flare allowed researchers, for the first time ever, to "measure accurately the magnetic field of the coronal loops, the building blocks of the Sun's magnetic corona, with such a level of accuracy," Dr. Kuridze noted.

Previously, scientists were limited by the weakness of the signal from the Sun's atmosphere that actually makes its way to Earth, and the relatively low power of man-made instruments, with magnetic fields studied in Dr. Kuridze et al's study registering at a whopping 100 times weaker than those encountered in a typical hospital MRI scanner. Nevertheless, these readings are still strong enough to confine the solar plasma making up a solar flare to within 20,000 km above the Sun's surface.

Study coauthor Dr. Michail Mathioudakis, a professor at Queen's University Belfast's school of mathematics and physics, boasted that the study contains a "unique set of observations" which, "for the first time, provide a detailed map of the magnetic field in coronal loops." The result, according to the academic, will be the opening of "new avenues in the study of the solar corona." These findings, in turn, could very well change humanity's understanding of the processes taking place in the Sun's immediate atmosphere.

Lebedev Physical Institute of the Russian Academy of Sciences
Is Earth Safe? Russian Scientists Detect MASSIVE Spike in Solar Activity
Solar flares can lead to magnetic storms which, if they make it to Earth, create the northern lights effect, also known as the Aurora Borealis. When sufficiently intense, solar flares threaten to cause extensive damage to man-made infrastructure, affecting everything from spacecraft and satellite instruments in near-Earth orbit to power grids on Earth itself. In 2011, the US National Academy of Science calculated that a repeat of a major solar storm like the one which struck Earth in 1859 could cause as much as $2 trillion in initial damage, and take up to a decade to repair.
...
Reddit
Google+
Blogger
Pinterest
StumbleUpon
Telegram
WhatsApp
450