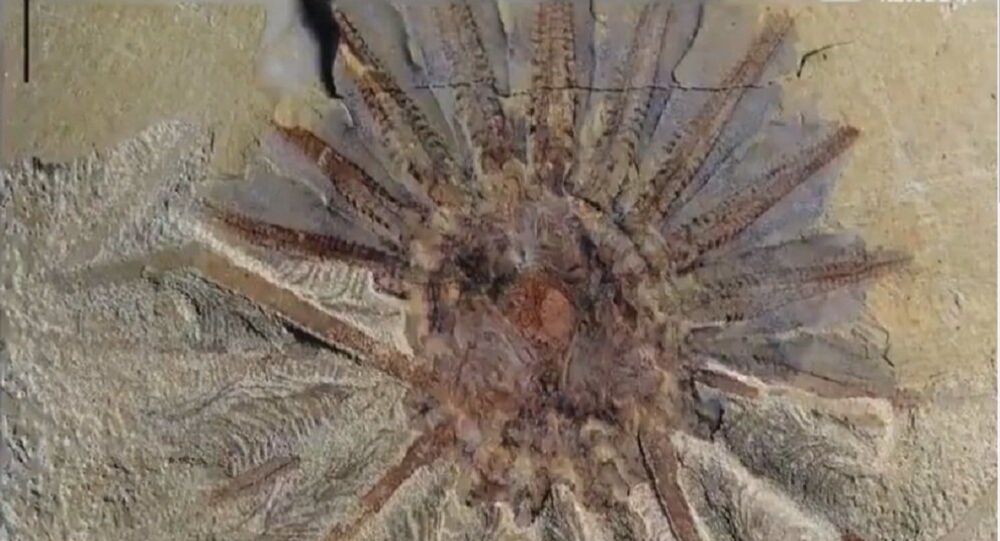 A mysterious sea creature believed to be at least 518 million years old has been discovered by scientists in South China.

A fossil of the ancient animal, discovered in a mudstone sample taken from outcrops scattered among rice fields and farmlands, is approximately 4 centimeters in diameter and features a set of 18 tentacles covered in thin hair, not unlike the comb jellyfish of today.

Modern comb jellyfish are carnivores who swim using bands of iridescent, rainbow coloured comb rows along their body composed of densely packed cellular protrusions, known as cilia, a Geology In report explains. The scientists speculate that the ancient creature could have used its "combs" to catch prey.

The creature has been dubbed Daihua, after the Dai tribe living near the excavation area, and "hua," Mandarin for "flower," according to the Science Bulletin.

Meet Daihua — new #fossil from the #Cambrian of Chengjiang & relative of the mysterious #ctenophores, which may have evolved from sessile ancestors. New paper by @macroevolut @cambriannelids & colleagues https://t.co/V0pyeR9JVv #evolution #paleontology #fossilfriday pic.twitter.com/eMM3IPMEgI

​"When I first saw the fossil, I immediately noticed some features I had seen in comb jellies," said Jakob Vinther, a molecular paleobiologist from the University of Bristol. "You could see these repeated dark stains along each tentacle that resembles how comb jelly combs fossilise. The fossil also preserves rows of cilia, which can be seen because they are huge. Across the tree of life, such large ciliary structures are only found in comb jellies."

© Photo : University of California Riverside
Ancient Sea Creature Discovered in Australia, Named After Ex-US President
The scientists from the University of Bristol, Yunnan University in China and London's Natural History Museum have compared the newly discovered fossil to another creature that also had 18 tentacles — Dinomischus. Despite looking like a flower — complete with a "stem" that anchored the creature to the seabed — it was an animal with an organic skeleton, and is believed to have fed by filtering the surrounding water through its hairy tentacles. This creature was previously assigned to the entoprocta group, but the joint team says it belongs to the comb jellyfish genealogy instead.

In a study published by the joint team, the scientists propose a theory explaining how modern jellyfish evolved from having organic skeletons to their modern transparent or iridescent appearance.

According to Geology In, the combs of the comb jellyfish evolved from tentacles in polyp-like ancestors that were attached to the seafloor. Their mouths then expanded into balloon-like spheres, while their original body reduced in size so that the tentacles that used to surround the mouth now emerge from the back end of the animal, the website explains.

"With such body transformations, I think we have some of the answers to understand why comb jellies are so hard to figure out. It explains why they have lost so many genes and possess a morphology that we see in other animals," said Luke Parry, the co-author of the study.

"It was probably one of the most exhilarating moments of my life," Vinther added. "We pulled out a zoology textbook and tried to wrap our head around the various differences and similarities, and then, bam! — here is another fossil that fills this gap."