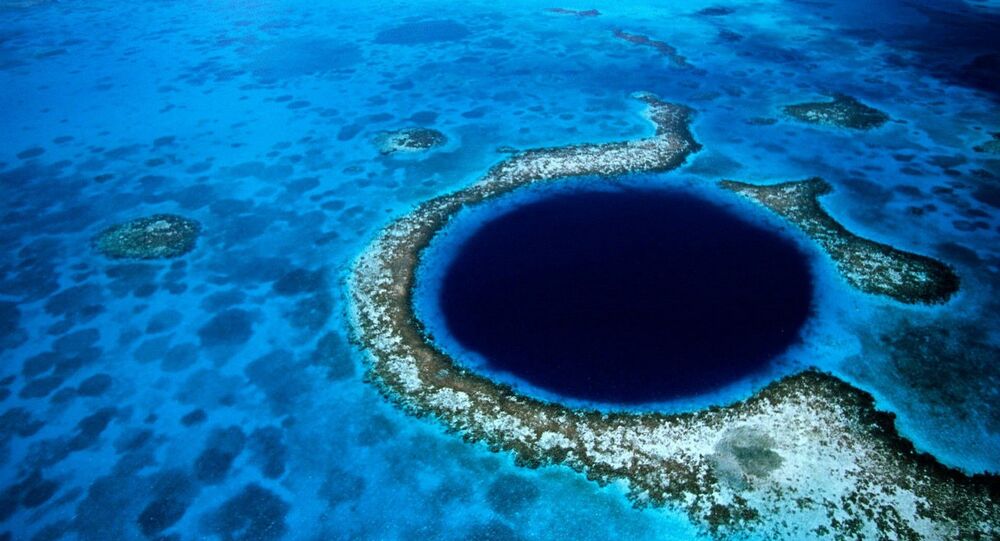 At over 300 meters across and some 125 meters deep, the ancient underwater sinkhole located off the coast of Belize is one of the largest of its kind anywhere in the world.

Scientists engaged in a highly detailed, three-week long study of the Great Blue Hole have shared some of their findings online.

Erika Bergman, oceanographer and pilot of one of the two mini subs fitted with high-res multibeam sonar equipment tasked with mapping what she described as a "majestic pit of acid" has published her impressions of the mysterious sinkhole on her blog.

"It was otherworldly down there and our data is one more way to share this revelation," Bergman wrote, referring to the mission's detailed 3D study of the geographic formation.

The mission, carried out late last year and funded in part by Virgin founder and billionaire Richard Branson, saw scientists take nearly two dozen dives to create a 3D map of the sinkhole using advanced sonar equipment, and capture unique, never-before-captured footage of marine-life encrusted along the stalactite formations in the hole, along with terraces worn down by thousands of years of water erosion.

Speaking to CNN Travel about her work, Bergman said one of the most mysterious finds were the unidentifiable "tracks" at the bottom of the hole, which she said remain "open to interpretation," given the total lack of oxygen at that depth.

In her blog, the sub-operator detailed the toxic, corrosive and potentially deadly hydrogen sulphide gas located around 300 feet below the surface inside the hole, which Bergman and her colleagues "dove straight into" for the mission.

Using onboard instrumentation, researchers discovered that just as they had predicted, the bottom of the pit was "completely anoxic," meaning "there's not a drop of oxygen below the [hydrogen sulphide] layer."

Bergman also reported on an eerie "conch graveyard," a stretch of sea floor where she and her colleagues observed "hundreds of dead conch that had presumably fallen in the hole and been unable to escape the steep walls or survive long without oxygen."

The oceanographer was pleasantly surprised that the water in the sinkhole was relatively clear of signs of human impact, with the team picking up "basically to or three little pieces of plastic."

© REUTERS / @JuanSharks/@OceanRamsey/Juan Oliphant/oneoceandiving.com
WATCH: Divers Near Hawaii Swim With ‘World's Largest' Great White Shark
The Great Blue Hole, once a dry landmass that was submerged during the last ice age some 10,000-14,000 years ago, became the subject of popular interest after legendary French marine explorer Jacques Cousteau explored it in the 1970s for his show "The Undersea World of Jacques Cousteau."

Fabien Cousteau, the great modern explorer's grandson, and a conservationist and explorer in his own right, took part in the recent mission.