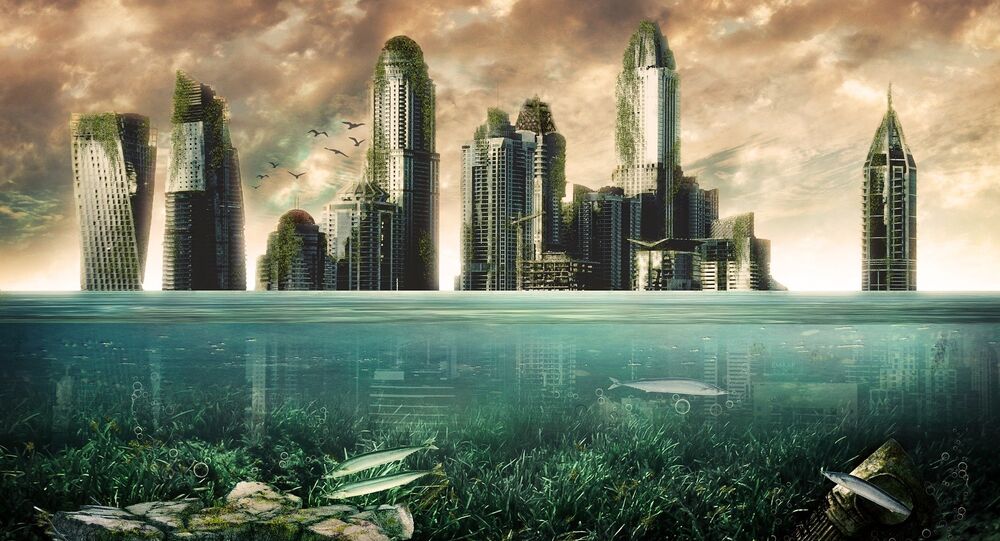 NASA scientists recently discovered that the Thwaites Glacier, a massive Antarctic glacial body about the size of Britain, has a giant cavity in it, roughly two-thirds the size of Manhattan. The worrying discovery has led to questions about what will happen if the glacier collapses entirely.

The glacial cavity, found at the bottom of a glacier in western Antarctica with the use of ice-penetrating radar and satellites with high-resolution lenses, was discovered by researchers at NASA's Jet Propulsion Laboratory, who called the find "disturbing" and warned that the mysterious cavity, once containing 14 billion tonnes of frozen fresh water, was still growing at an "explosive" rate. The discovery is vital, the scientists said, because it demonstrated that Antarctic ice is melting not only in areas adjacent to oceans, but also from underneath its thick ice sheets.

The immediate and most obvious concern about the discovery is that if the Thwaites Glacier, which extends some 192,000 square kilometres, or 74,000 square miles, were to melt completely, it could raise global sea levels by some 2 feet (0.6 metres). According to the Smithsonian Institute, such a rise would be enough to threaten coastal cities around the globe, flooding island nations and leading to soil erosion.

© CC0
‘Disturbing Discovery’: Scientists Find Giant Hole in Antarctica
Last year, researchers from Germany, Austria and Australia released a study which concluded that with sea levels expected to rise two feet worldwide by the year 2300, low-lying areas of Florida and Bangladesh, and entire nations such as the Maldives in the Indian Ocean or Kiribati in the Pacific, would be threatened, with massive coastal urban areas such as Shanghai, London, New York, and New Orleans affected as well.

If rising sea levels come to pass sooner than expected thanks to new, previously unknown phenomena, like the Thwaites Glacier cavity, "that's going to really throw a wrench into the ability for these nations to plan and prepare for the impacts of sea level rise," Dr. Ted Scambos, a senior research scientist at the US National Snow and Ice Data Centre, told USA Today.

In addition to its massive store of frozen fresh water, the Thwaites ice formation is thought to serve as an important 'door stop', preventing nearby glaciers from sliding toward the sea. If that happens and those glaciers melt, sea levels would rise not by two feet, but up to ten feet (three metres), affecting areas of human habitation much further inland and causing even more chaos to local ecosystems.

In this sense, Thwaites "holds a kind of wildcard for being able to increase the rate of sea-level rise quite rapidly if things unfold a certain way," Scambos said.

In addition to their possible threat to local wildlife, icebergs breaking off from Antarctica could pose a major threat to human oceanic activities, particularly shipping. In 2018, New Zealand news portal Engineering News warned that Antarctic icebergs were already posing a heightened hazard to southerly shipping routes. A year earlier, the US Coast Guard's International Ice Patrol warned shipping companies that an unusually high number of icebergs were drifting into shipping lanes in northern areas, with the monitoring agency reporting four seasons of "extreme" danger in a row due to bergs drifting through the North Atlantic.

© East News / imago stock&people
The Emperor Has Arrived: Super-Rare All Black Emperor Penguin Finally Caught on Camera (VIDEO)
And while Antarctic icebergs are seen as less of a threat than those forming in the Northern Hemisphere and the Arctic, given existing shipping lanes, they still pose a threat, according to scientists.

Earlier this month, researchers from the Antarctic Research Centre at New Zealand's Victoria University of Willington and McGill University in Canada published an article in Nature which warned that the billions of tons of meltwater flowing into the oceans from melting ice sheets in Greenland and Antarctica may result in more extreme global weather conditions worldwide and serve to destabilise regional climate in the very near future.

According to the study, the pumping of billions and billions of tonnes of new, previously frozen cold freshwater into the ocean has the potential to slow the global oceanic conveyor belt network regulating climate, resulting  in longer, more extreme hot or cold snaps, wet spells and dry stretches, with much greater temperature variance in some areas of the world than at present.

In this light, the discovery of the massive cavity in Thwaites Glacier may mean that this process, which the New Zealander and Canadian scientists said may come within decades, may occur even faster.

© REUTERS / Pinar Istek
‘Your Face Will Freeze:’ Polar Vortex Blasts US Midwest, Northeast with Record-Breaking Cold (PHOTOS, VIDEOS)
Finally, some scientists, including Lucas Zoet, a professor at the University of Wisconsin-Madison's department of geoscience, fear that the collapse of the Thwaites glacier "could potentially destabilise the whole region of West Antarctica."

"It's a major throughway of how ice gets discharged from West Antarctica into the ocean," Zoet explained, speaking to USA Today. "If this cavity grows or sort of expands, that's one way it can get off this last sort of ridge that Thwaites Glacier is hanging on to," the geologist warned.

Worst is Yet to Come?

According to Dr. Scambos, the discovery of the massive cavity in Thwaites Glacier does not bode well for our future, with no end in sight.

"The point is not so much [in] whether or not it's going to happen, unless we really change how much heat-trapping gasses we're putting in the atmosphere," Scambos said, when asked about the prospects of the glacier melting. "Eventually, we're going to lose big areas of the Antarctic, big areas in Greenland. The important thing is how fast is this going to happen," the scientist concluded.