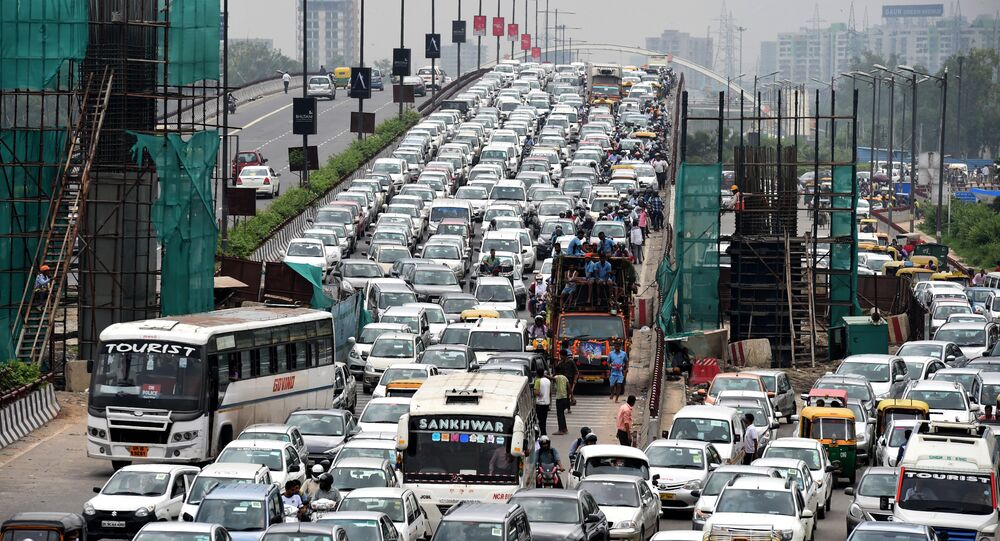 India currently incurs huge losses due to traffic jams, which hinder the movement of goods and delay motorists on toll roads. The government hopes to address this problem by introducing a free-flow toll collection system on the 1,419 km New Delhi-Mumbai highway.

New Delhi (Sputnik): India will introduce a free-flow toll collection system which utilises Russian-developed GLONASS satellite navigation on one of its most-used highways later this year. A contract for the implementation of the project was signed between RT-Invest Transport Systems LLC (RTITS) and the National Highway Authority of India (NHAI) recently, according to a statement from the RTITS. The Russian IT company is credited with the development of ‘Platon' — an electronic toll collection system which is part of its telematics solutions bouquet that allows users to avoid traditional toll gate problems.

The Russian company was selected through an open tender over key international players such as Skytoll (Slovakia), Efkon India Private Limited, National Toll Payment Services PLC and other companies which had bid on the project.

India is currently witnessing a road construction boom. Major highways are being reconstructed and expanded, and road network standards are undergoing a major overhaul.

"The current project is the first step in organising convenient and non-stop traffic on the New Delhi — Mumbai corridor. If the Russian technology proves its efficiency and ability to solve existing problems on highways, the next step could be the roll out of the project across the entire road network in the country," the statement cited Ashish Sharma, the board member of the National Highways Authority of India as saying.

"Russian transport telematics is one of the most advanced technologies of its kind in the world. Our high-tech developments have a huge export potential," said Anton Zamkov, Director General of RT-Invest Transport Systems LLC.

"It will be a unique combination of the most advanced digital solutions. They will prevent huge traffic jams on Indian roads, increase the speed of the delivery of goods and reduce costs for carriers and drivers. In addition, within the framework of the project, our Indian partners will test the truck Weight-In-Motion system developed by us and a number of services on their roads. I am sure that these are only the first steps. We are working towards participating in a number of tenders and we will increase the export of our projects. On the basis of the technological platform that is used in the Platon system, we can create and develop digital services for Russia and foreign countries," Anton Zamkov added.

The country has more than 12,000 toll roads that incorporate an entry-through-barriers mode of access.

"We support the development of Russian-Indian partnership and hope that use of Russian technology will find effective application in the transport industry of India, and help solve existing logistics problems as well as attract additional funds for  the construction of safe roads," said Yaroslav Tarasyuk, the Trade Representative of the Russian Federation in India.

Vehicles will be equipped with On-Board Units (OBUs) which operate using the GLONASS satellite system;  these OBUs were specially designed by the Russian company for the project.

'Absurd and Fiction': Russian MP Denies Spying on US Via Glonass