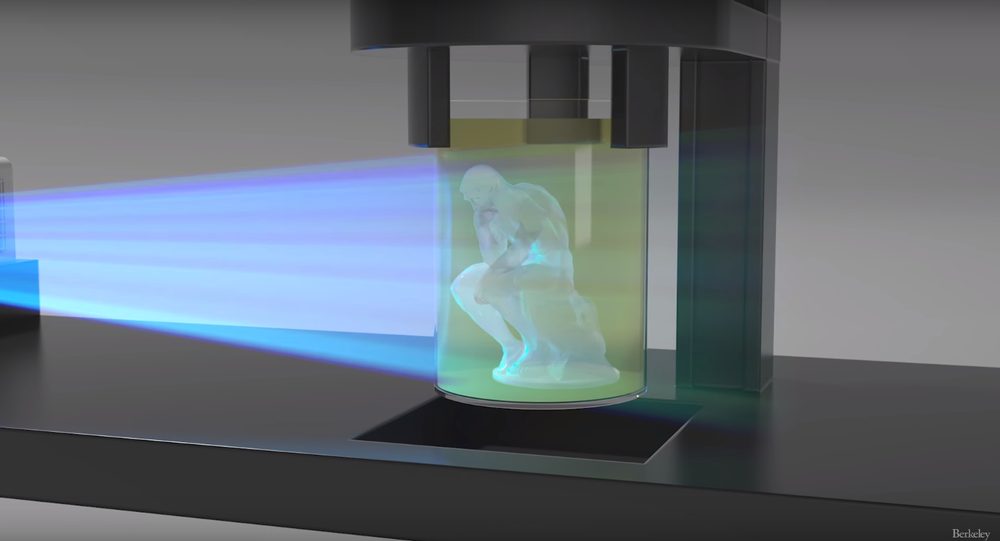 The concept, which is touted as being a possible next step in rapid manufacturing technology, uses light to turn a gelatinous solution into a 3D object in a matter of seconds.

Scientists from the University of California, Berkeley have come up with a new take on 3D printing. Unlike traditional 3D printers, which create complex objects layer by layer, the new method allows for objects to be created nearly instantaneously in one shot using light from a projector and a light-sensitive gel-like liquid.

When exposed to a certain intensity of light, the synthetic resin, placed in a transparent cylinder, quickly hardens as it rotates.

The new design effectively poses the ability to eliminate one of 3D printers' major drawbacks: their slow speed.

The demonstration video showing off the new technology shows that just like traditional 3D printers, the new design can create (as yet crude) copies of everything from human jaws, to mini screw drivers, to a tiny version of Auguste Rodin's The Thinker statue.

Scientists have affectionately dubbed their creation "the replicator," in a nod to Star Trek, a popular American science fiction television series created by Gene Roddenberry. In the show, "replicators" are machines which quickly create and recycle objects by rearranging subatomic particles to form molecules and arrange them to form an object. In the show's lore, the replicator essentially eliminates material scarcity.

© Photo : SPbPU Media center
Russian Scientists Develop Neural Network for 3D Printing of Metal Products
Although the researchers' goo and light-based solution doesn't go so far as to claim that they'll change economics as we know it, inventors do boast that items created by their printer are "more smooth, flexible, and complex than traditional 3D printed objects."

The system is also simple. Hayden Taylor, coauthor of a new academic paper on the design published in Science, explained that the system requires "an off-the-shelf video projector" which is then used "to project a series of computed images, while a motor turns a cylinder that has a 3D-printing resin in it."

"Obviously there are a lot of subtleties to it – how you formulate the resin, and, above all, how you compute the images that are going to be projected, but the barrier to creating a very simple version of this tool is not that high," Taylor added.