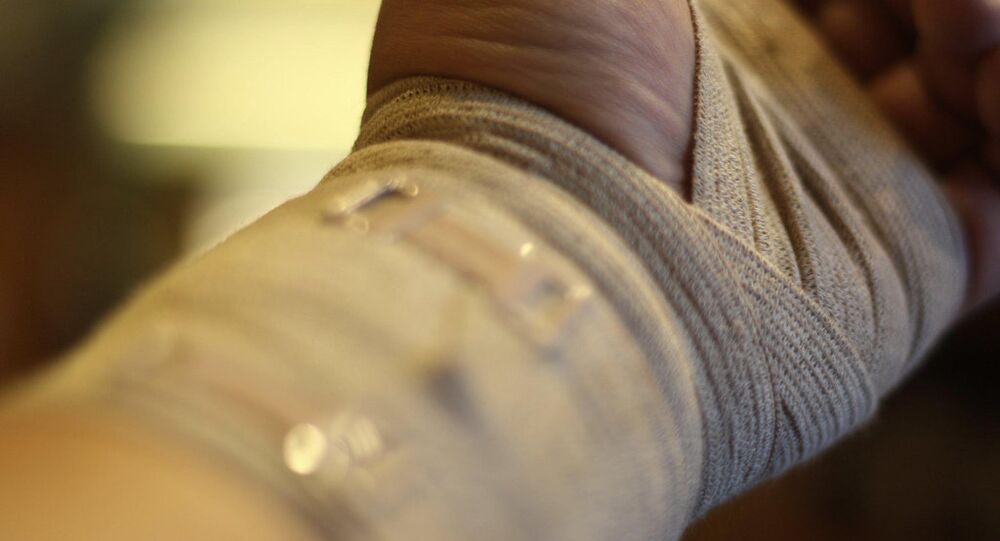 The material has a strong antibacterial effect, and can be kept on over long periods of time without needing to ever be changed, thereby accelerating skin regrowth and reducing the risk of infection.

Scientists from the Moscow-based MISiS National University of Science & Technology, the Central European Institute of Technology in Brno, the Czech Republic, and several other Russian and Czech universities have invented a new biodegradable antibacterial action field dressing.

The field dressing, said to have great potential for future application in the healing of wounds, do not require changing, and can literally be put on over top of one another as they degrade.

The traditional use of an antiseptic in the treatment of wounds, consisting of washing the affected area with a solution and using gauze dressing to increase the outflow of fluids, repeated several times, has saved countless lives and been instrumental in treating everything from burns and cuts to gunshot wounds and other serious injuries.

© CC0
Scientists Develop New Composition Against Influenza A Virus
However, such treatment, particularly the use of antibiotics and the need to change the dressing regularly, has not been without its problems. For one thing, antibiotics kill not only dangerous bacteria, but useful bacteria as well. And when dressings are changed, the fragile area undergoing healing is disturbed, which can cause severe pain to patients.

Offering a solution, Russian and Czech scientists say they have come up with a biocompatible dressing material which can act locally on the area of inflammation, and, just as significantly, does not require changing. As they slowly release their antibiotic, the dressings gradually dissolve on the skin. A new one can be put on over top of the old one, if necessary, without removing it.

"As the basis for our invention, we used polycaprolactone nanofibers – a biocompactable, bioresorbable material. We attached gentamicin, a broad-spectrum antibiotic, to the fibers. What we found was that the action was prolonged: we observed a significant decrease in the number of bacteria even 48 hours after the material was applied. Usually, surfaces with an antibacterial effect fulfill their potential within the first day or even the first hours of use," study coauthor Dr. Elizaveta Permyakova explained.

Scientists performed experiments using three strains of E. coli bacteria, with the strains showing varying levels of resistance to the antibiotics, but nonetheless combatted against effectively by the dressing.

© Sputnik /
Scientists Develop Water Purification Method to Prevent Environmental Disasters
According to the researchers, their new material is potentially applicable not only for treatment to heal skin, but to treat inflammatory bone diseases such as osteoporosis and osteomyelitis.

Scientists continue to work on improving the material. In the future, they plan to experiment with other antibiotics, including ciprofloxacin, a new antibiotic which most types of bacteria have not developed a resistance to. Moreover, scientists are working to increase the bandages' efficiency by creating multilayer samples (consisting, for example, of a layer of antibiotic, a layer of heparin to reduce blood clotting, and a second layer of antibiotic).

The scientists have released their findings on the experimental bandage in the Materials and Design academic journal. Their results can be found here.