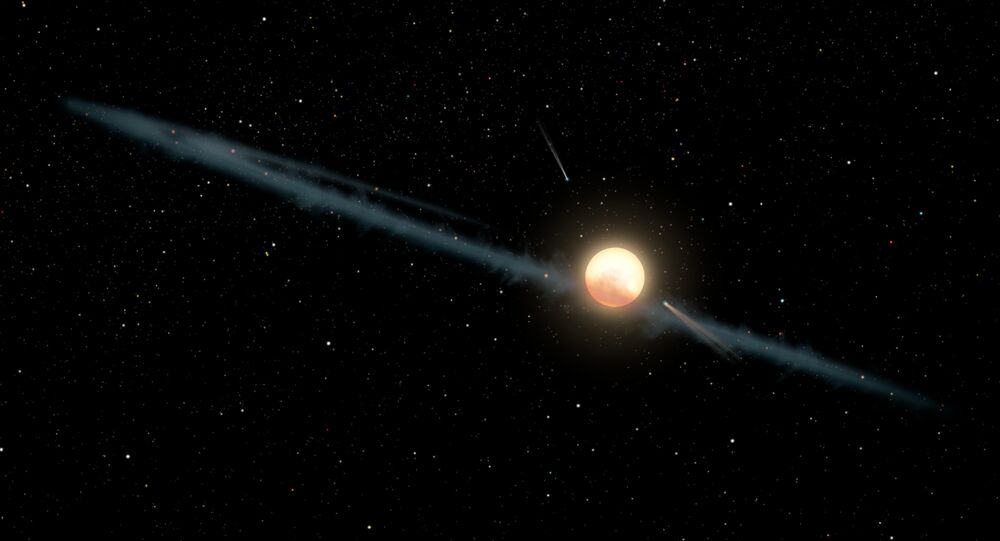 The star’s dimming may be explained by the presence of some kind of object or a group of objects in its vicinity, large enough to block its light.

An international team of scientists has reported a strange behavior exhibited by a star designated as VVV-WIT-07, which may possibly hint at the presence of some kind of massive object in its vicinity, according to an article published in the Monthly Notices of the Royal Astronomical Society.

© AP Photo / ESO/A. Mueller et al.
An Exoplanet Explanation? 'Alien Megastructure' Teases Star Gazers With Weird Dimming
Astronomers first noticed that the star is dimming way back in 2012, when its brightness first dimmed slightly for 11 days, then nearly faded to black for a period of 48 days.

As astrophysicist Eric Mamajek explained to Scientific American magazine, such dimming suggests that the star’s light is being blocked by a gigantic object or a group of objects.

"It's got to be over a million kilometers wide, and very dense to be able to block that much starlight," he said.

In 2015, Tabetha Boyajian, an astronomer at Louisiana State University, has discovered that a star known as KIC 8462852 rapidly dimmed over the previous years, giving rise to a hypothesis that the dimming may be caused by an alien megastructure blocking the light.

However, in 2018 scientists debunked this theory, with Boyajin herself saying that "dust is most likely the reason why the star's light appears to dim and brighten."